Amazon Household and Audible account sharing: these can't both be right

What is Family Library Sharing?

What is Amazon Household?

Revenge of RSS: Google returns to blogs and feeds.

Remember when Google killed Google Reader Shares? October 31, 2011. RSS had been ailing for years by then. Google Reader shut down a couple of years later, by June of 2013 I’d settled on my still current favorite - Feedbin.

Google killed Google Reader in favor of the horribly named G+ (did they learn nothing from Prince’s glyph?). G+ and its proprietary subscription/notification protocol lasted about two years. Twitter dropped its RSS support. Now Twitter is dying. Only Facebook was able to make a proprietary subscription-notification system work. Quietly Google’s core blogs continued to operate in the background. 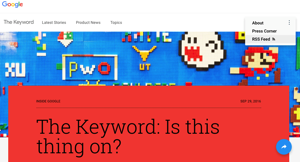 How does the world look to Trump's core supporters?

Set aside the neo-Klan-Nazi minority. Set aside the truly despicable - Coulter, Hannity, Falwell and the like. Forget the hell-spawn who think only of their personal wealth.

… Trump’s fortunes rest on his core supporters, white men who lack a four-year college degree … He leads Clinton among them by 76-17 percent, an enormous 59-point advantage. That’s widened from 40 points early this month; it’s a group Mitt Romney won by 31 points -- half Trump’s current margin -- in 2012.

Whatever happens with this election, that 60% gap is a staggering fact.

How does the world look like to these non-college white men of the 4th quintile?

I have limited exposure to this cohort. A few Facebook friends — but they don’t post much about Trump. A family member with a cognitive disability claims to like Trump. That’s about it.

I need a journalist-anthropologist to falsify my story. I can’t help imagining a story though. It goes like this …

None of this is going to go away. If we want to keep civilization going we need to give this cohort hope.

[1] As a pedestrian and cyclist I am far more likely to be injured or killed by a white woman on a phone than a black man. FWIW.

Apple is planning to eliminate many iOS parental controls over next year?

This sound like quite bad if true (emphases mine) …

… Apple plans to deprecate some non-supervised restrictions at some point, though not immediately, in the iOS 10 series. The restrictions slated for deprecation are:

These restrictions will become available only for supervised devices.

The result would be to make iOS devices like Android devices — restrictions require a mobile device management solution (schools and businesses, also packaged for home use).

The only way this could be a net positive for parents (and those who care for special needs and vulnerable adults) would be if Apple were to add supervision capabilities to iCloud.

I’m going to look for more information on this.

Maciej's Pinboard is a contender for longest lived microblog platform.

Twitter is racing app.net to the grave. Google social is almost as forgotten as Apple’s flails.

Maciej Cegłowski's Pinboard though, that continues.

Almost a perfect microblog foundation — save that it requires a unique link for each post. [2]

Privately held by a brilliant iconoclast (eccentric?) with atypical values. Maciej has a regular cash stream, seems uninterested in further growth, does no marketing, and his ongoing costs decrease as storage and processing costs fall. He is unlikely to sell or terminate prematurely. Pinboard’s longevity is largely bounded by the health of a male born in 1976 who enjoys travel, is probably a non-smoker, and knows the bus will be fine.  Another 30 years seems achievable. Even Wordpress is unlikely to last that long.

[1] I had to go incognito mode to find pricing. Turns out I paid when he had some kind of lifetime fee. A yearly fee is better.

[2] Pinboard has (editable) Notes which have Title, tags, and description (markdown formatted text). They are a handy way to create a text string with URL and RSS feed, but their native display omits the description portion and I don’t know of any app support (Pinner.app does not show Notes). I also don’t know if there’s API support for Notes or how export works. Notes are basically incomplete, but could be extended to create a complete (spartan) microblog framework. One could create a root “Note” and then, using Pinner, author posts as linked-lists of bookmark referencing prior bookmark … (hence unique url for each) …

On being a non-contender in a regional mountain bike race

I’m not a competitive athlete, but over the past 3 years I’ve been doing a lot of exercise. This is relatively new for me. I’ve always been active but I scaled up the exercise when I went from middle-aged to old. (Whatever the dictionary may say, 55+ is different from 50- for most of us.)

Yesterday I played at being a competitive athlete. It was the first official race I’ve competed in since I was a member of short-live swim team [1]. I’d been in timed events previously, but they were either not official races or I was keeping a slow child company. This time it was the real thing — a regional mountain biking race known as the Chequamagon Fat Tire Festival.

Since then I’ve been ruminating about the race more than I expected. Enough rumination that I’m compelled to write it out.

There are two distances at this race, the 40 mile and the 16 mile. Neither is technically demanding; the 16 has a slightly higher technical and single track percentage. Although the trails aren’t technical it would be hard to do the race without a fat tire; the often steep trails are grassy, sandy and usually muddy. There are minimal prizes but the race still attracts some amazing regional athletes. Even the 16 has some elite riders who for various reasons didn’t want to do the 40 or couldn’t get a slot.

I did some things right. I switched my obsolete 26” [2] Cannondale Team Scalpel from 2.1” dry surface XC tires to 2.2” climbing tires. I went easy on my CrossFit class the day before the ride. I’d done a good amount of trail riding with skilled people so I was much better on downhills and shifting than most of my cohort. I carried and used “goo”, small pouches of high glucose paste. My bike was in good mechanical shape. Some recent straight leg raise work seemed to help my arthritic knees. [4]

I make some mistakes. I should have skipped CrossFit for a week before the ride — my inner quads started out sore and sluggish and improved slowly. I wore a long sleeved undershirt because the start was cold and drizzly — I had to stop and remove it. I should have brought a waterproof heavy warmup jacket and put it in the “checked post-race” bag just before the bike-ready deadline [6]. I forgot to take the goo 5 minutes before start — I was amazed how well it worked during the race. I didn’t drink as much as I thought I had, that would have been a problem in a longer race. I carried a hydration pack but for this distance I might have been better with water bottles. I didn’t have a race plan or a timer/speedometer so it was hard to adjust my effort. I didn’t realize there’d be no AT&T coverage; I could have left my phone behind [7]. I also didn’t train for the race, but that was by choice [5].

When I was done I felt like I’d had a big CrossFit workout — the kind of thing I do every 1-2 weeks. I’ll clearly never be a contender — I don’t have the genetics. It was fun though.

Were I to repeat the 16 next year, starting in wave 5 with fewer mistakes, some race planning, and a watch (or speedometer), I think I could get to wave 4 (3% faster). To get to wave 3 (13% faster) I’d definitely need to train. I suspect wave 3 would be my limit.

I’m more likely to try the 40 — if my knees allowed. I would want to train though.

[1] At a High School that didn’t have swim team practices. It did not go well.

[2] Obsolete because after decades of using 26” wheels inherited from trick bikes of the 70s manufacturers realized that bigger wheels were faster. The transition happened around 2010; new materials and designs enabled stronger wheels and bigger profit margins. Thanks to information asymmetry in 2014 I purchased a lovely but obsolete 2010 racing machine that has been both educational and costly. On this particular race however my bike wasn’t in any way a limiting factor; I didn’t spin out on climbs.

The 29” transition was followed by a 27.5” option for shorter riders and the fat bike option. Lots of real tech improvement has created an explosion of good bikes. Which means a crash is sure to come…

[4] Inherited slow-mo knee-hand-foot thing. I bought some cheap ankle weights and I do straight leg raises while sitting (work) and driving (commute, nobody around, cruise control, no obvious problems when I test braking response.) The only way to do something as boring as weighted leg raise.

[5] I didn’t want to give up my CrossFit (CFSP, yeah) time, and my mountain bike time is focused on being with #2 son who is even less athletic than I am.

[6] The post-race bag was a nice feature, it was transported to the finish were there were showers with bath gel post-race! Bag should hold a warmup jacket, a light but big backpack for carrying things (so don’t need to keep bag), a towel and wash cloth, shoes, clothing, etc.

[7] So weird to be in an AT&T coverage hole. I missed meeting up with a friend because we didn’t set up an old-school rendezvous point.

I’ve eliminated every other possibility. The unlikely remnant is that Americans who watch television secretly like television commercials. Why else would my Samsung TV ship with a OTA (antenna input) USB record feature that’s disabled for the US market?

Yes, patents and legal annihilation, but if there were demand they would be overcome.

I miss my VCR.

In other news the best thing I ever bought my 94yo father is his LTE iPad. All it does is show family photos and enable our weekly FaceTime calls. He doesn’t do anything with it, an aide manages call answering and his nurses know to tap on the iCloud based slideshow. During the calls we talk, but I also do an iPhone narrated visit of home, office, mountain bike trail, etc. Gerbils, dog, bicycles, tools, whatever. Fifteen to twenty minutes once a week and he loves it.

Lastly, I’m still doing the exercise gig, despite being a zillion years old and enjoying a slow-mo familial auto-immune arthritis. Over 3 years now. You too can manage weight without harsh diets; you just need to do an insane amount of exercise.