The Post-AI era is also the era of mass disability 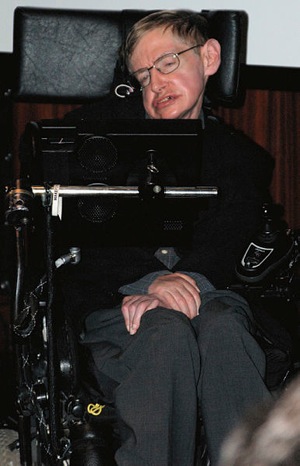 Obviously this is a rhetorical question. Hawking is 70 and retired from the Lucasian chair, but he remains a tenured professor. He is a bestselling author of multiple popular books, has been married twice, and has three children.

He is clearly not disabled.

Is a physically strong male with an IQ of 65 disabled in Saint Paul, MN? Yes, of course. Forty years ago, however, there were many jobs that would pay above minimum wage for a strong back and a willingness to do tedious work. Heck, in those days men earned money literally pumping gas.

Would Stephen Hawking have been disabled in 1860? Yeah, for the short duration of his 19th century life.

Disability is relative to the technological environment. Once a missing leg meant disability, now it rules out only a small number of jobs. Once a strong back meant a job, now it means little.

Technology changes the work environment; it makes some disabled, and others able. It's an old trend, automated looms put textile artisans out of work 200 years ago.

Those artisans had a rough time, but workers with similar skill sets have done well since. Economic theory and history teaches us that disruptive technological transformation can produce transient chaos, but over time resulting economic growth will benefit almost everyone. More or less.

But history only repeats until it doesn't. Economic benefits don't have to be evenly distributed. If fewer jobs require strong backs, then people whose primary talent is the strength of their spine may earn relatively less. If supply exceeds demand, the price of labor will fall below the "zero bound" of the minimum wage. Some backs won't find work; those workers are disabled.

Most people can play in more than one game, but the competition is getting tougher and the space for human advantage is shrinking in the post-AI era. The percentage of the population who are effectively disabled has been rising along with national income and the Gini coefficient. It's not just the pioneers now, Respectable economists are wondering about tipping points.

So enter The Wolverine... 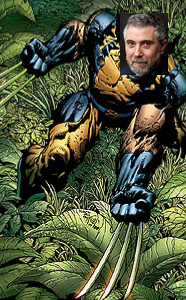 Krugman acts as though he's just started thinking about the post-AI economy, but he isn't fooling anyone. We know he grew up on Asimov and the Three Laws. Now that the election is done, and he doesn't have to be a strict non-structuralist any more [1], he's started writing about what the post-AI era means for income inequality using the phrase "Capital-biased technology". He has recently promised us a "future" column on policy implications.

Future - because he's trying to break it to us gently. I, of course, have no such qualms. A year ago I wrote about the policy implications of the Post-AI era (emphases added) ...

The AI Age: Siri and Me

... Economically, of course, the productivity/consumption circuit has to close... If .1% of humans get 80% of revenue, then they'll be taxed at 90% marginal rates and the 99.9% will do subsidized labor. That's what we do for special needs adults now, and we're all special needs eventually...

[1] Clark Goble made me read a critique of my team's champion. I found hurt feelings (K has claws), but no substantive critiques. That's a shame, I've long wanted to see somebody like Mankiw (who was once readable) engage K on his denial of structural factors in 2009-2012 unemployment. I suspect K has always known of ways to argue the structural case despite the persuasive low global-demand data. I wonder if he was disappointed that nobody dared challenge him.

Tis the season of the apocalypse - Cambridge Center for Existential Risks and the Preppers.

It's not just the Mayan lunacy afflicting China and Russia. It's also the Cambridge Centre for the Study of Existential Risk and The American Prepper Movement. Not to mention Ishtar and the Solstice and David Brin's Existence.

We could use some more sunlight. Economic growth would be good too.

PS. The Economist on end-of-the-world predictions since 250 AD.

We tax cigarettes to offset some of the social costs of tobacco use. This is type of Pigovian Tax.

We could tax bullets to offset the direct costs of America's weapons glut, but it's hard to make up for murder.

Better to prevent the murders.

So tax bullets to pay for better mental health care.

All psychiatrists, social workers and primary care physicians know what a train wreck American psychiatry mental health care is. Rich state, poor state, it's a train wreck everywhere. Families don't know what to do for impaired loved ones - because, often, there's nothing available.

There are many things that could be done. We lack will, and we lack money.

The money problem is easy to solve.

Google Reader Shares and the history of the feed.

I shared thousands of articles through Google Reader.

They were a part of my extended memory. I often searched that repository.

This evening they are gone....

These days I share on app.net, but app.net is a development platform and a better version of Twitter; it's not a GRS replacement. I miss Google Reader Share -- and I miss the GoogleMinus that built it.

... In the beginning, the best word I can use is that Google tolerated the project. Then, they gave it — support is too strong a word. They gave it some thought,” Wetherell told me of Reader’s early days. “It was kind of like The Dirty Dozen, that movie, where we would meet people in the hall, and we’d kind of mention it and they’d give us a nod and join. ..

... a sign in the Reader offices ... said “DAYS SINCE LAST THREAT OF CANCELLATION.” The number was almost always zero. ..

... Shih found out in the spring that Reader’s internal sharing functions — the asymmetrical following model, endemic commenting and liking, and its advanced privacy settings — would be superseded by the forthcoming Google+ model. Of course, he was forbidden from breathing a word to users... Shih left Google in July....

Between the article and comments several GRS-like products are mentioned:

Incidentally, one commenter tells us that it would have been quite hard to save GRS once Buzz was killed ...

Christopher Barth: Reader social was too interconnected with the Buzz API. Lashing it slowly into the +/API was the only choice once the plug was pulled on Buzz - that transition was horrible due to how underdeveloped the +/API was at the time. +/api had only people, comments, and activity when G+ opened. Sort by magic required the Buzz 'like' (+1), which was not available in the +/API.

I haven't signed on with any of the GRS replacements yet -- I'm focusing on app.net for a time. I'll be tracking them though.

Minnesota DFL phone spam - might not be what it seems

Since the election we've received a nightly phone call with a Caller ID of MN DFL party and a return number of 651-251-6300. As others have noted, that is indeed the phone number for the Minnesota DFL Party.

I assumed it was simply a fund-raising robocall. We are good Commies and donate to the Party, so it's not surprising that they'd harass us. It has been, however, oddly persistent. So tonight I actually answered the phone -- but I heard only a few meaningless sounds. Nobody was there.

I wonder if this were really a DFL call, or if someone is spoofing their number. That would be a nasty trick; a small donation to the right offshore resources could paralyze a fund-raising program.

If so, it might be that the villains don't know the election is over. Or the nighty calls could simply be a malfunctioning robocall system. I'll try to contact the DFL and ask what's up (I'll need to disable some of my DFL email spam filters to get a response). Even if it's not a dirty trick in this election cycle, it's a sure-fire strategy for the next one. Just another way that the era of switched network voice telephony is over. We will need caller-authentication with reputation-based call triage.

I'll update this with what I hear from the Minnesota DFL.

Update 12/8/2012: It seems to be incompetency, not malevolence. It seems the DFL really is spamming our home nightly.

KPCB annual internet trends presentation is online. KPCB does this yearly under the "Meeker" brand. The online version isn't displaying correctly today, but there's a link to the PDF version.

There's a lot of fluff in the report. These were the parts I thought were mildly interesting: