Amazon reviews have long been helpful to me, and were once a big part of Amazon’s value proposition.

That is no longer true. Amazon is filtering out negative reviews.

I learned this after attempting to review Anker bluetooth earbuds I bought for Emily’s birthday. The power switch was defective. That wasn’t a complete surprise, I have a similar pair and I often have to push 2 or 3 times. Anker should have spent another 10 cents on that part.

Amazon made the return easy, but when I tried to write a review I got this notice:

“Sorry we are unable to accept reviews for this product …”

I then switched to Emily’s account. There I was at able to start a review, and even able to give in a two star overall rating. When I clicked 1 star for material quality however the “unable to accept reviews” notification appeared: 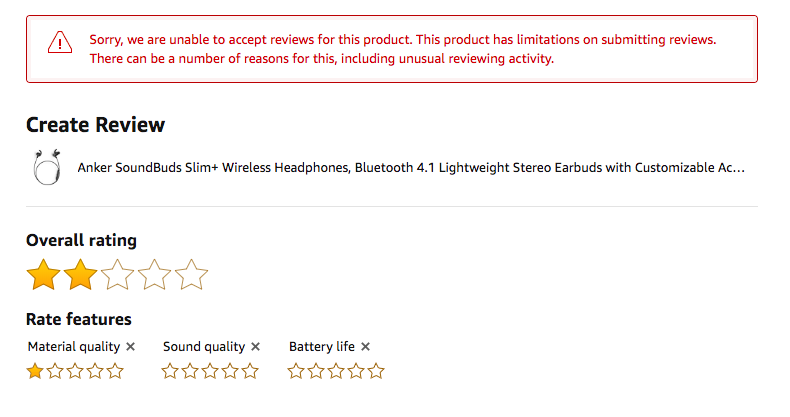 This is, of course, worse than if Amazon removed all product reviews. They are promoting systemic bias in their closed world. The Fox model is catching on elsewhere, Apple is doing something similar with the Mac App store.

A week ago, in a Facebook group for CrossFit physicians, I read a post blaming poor parenting (i.e., poor mothering) for childhood obesity.

I always imagine these confident people are young, but I believe that is not always true.

There are likely things. There is entropy and death (but also the inexplicably low entropy of the early universe, and it is possible for an Old person to be stronger than they were in middle age).

Most things though, they are … complicated. They are some of this and some of that.  If you cannot imagine a worse outcome than an obese child you have not opened your eyes enough, or lived long enough for the world to pin your eyelids back and burn reality into your retina.

Look for the Old of any age. Some have something that might be wisdom. Ask them about certainty.