What is Great Replacement Theory?

So now I'm trying to figure out what Great Replacement Theory is. It seems to be one part true and one part sort-of true.

The true part is that we expect a low-melanin blond-red hair (LMB) phenotype to become less common barring genome hacking. That's been well expected since at least the 1970s (perhaps 1870s?). These are recessive genes and migration and differential birthrates mean they will become uncommon.

The sort-of true part is that libs like me don't care about this. It's not just that my white skin is a PITA (thin, burnt, premalignant), it's also that we have a lot more to worry about. Like civilization for example.

The mostly untrue part is that libs/dems are conspiring to accelerate the decline of the LMB phenotype.

It's true we hope the GOP's white nationalism will discourage "non-white" (whatever whiteness is) voters, it's true we encourage immigration as a generally good thing for a low birth rate America that has benefitted from attracting worldwide talent, it's true that we enjoy and appreciate novelty and diversity, and it's true that we think it would quite good if all this led to the GOP to morph into a non-racist opposition party.

But it's not true that this is an explicit conspiracy.  It is, perhaps, an emergent result of our not caring that much about preserving a particular phenotype, our interest in preserving human and American civilization and our affection for novelty and diversity. I can, however, see why people who are passionately attached to LMB phenotypes would confuse this emergent result with a diabolical conspiracy.

Alta Vista was a very good search engine. I didn't feel like I was missing much in early 90s; I could answer many questions easily. Then, in 1996, I tried Google Search. I was one of the first users at our dot com startup. It was miraculous.

The 90s web combined with 90s Google Search gave us all the best of world's written knowledge. It was the closest we ever came to a universal library.

Things go a bit rougher after the dot com crash. We started seeing more click-driven fake sites. On the other hand blogs were great and Google more or less kept the crap under control. Then came the 10s.

Sometime in the 10s Google gave up. Search results started to incorporate paid placement. Black hats figured out how to bypass Google's quality filters and generate adware clicks. At the same time blogs died and quality content got harder to find. By 2017 we knew we were in trouble.

Today I searched on something people ask a thousand times a day: "How do Facebook Messenger hacks work?" Google suggested a variant phrasing. This is what I got (click for full size): 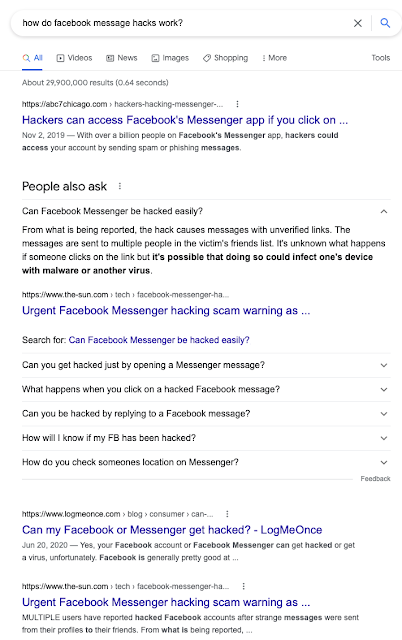 The-sun.com. Google gave me two articles from the-sun.com. And some "quick answers" that are all crap.
Yes, there are people who know how Facebook Messenger hacks work. And yes, they've probably explained it online. But that knowledge is lost in the hellstrom now.
Google Search is dead.
PS. Here's how the Facebook Messenger phishing attack works. It's the old 'enter password' trick.
Posted by JGF at 5/12/2022 No comments: