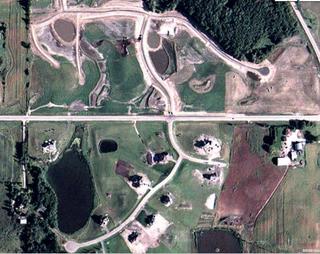 Wow. Today our family drove about 30 miles east and south of Saint Paul for an Apple Orchard outing. It's been a few years since we last did that trip; the transformation of the region is stunning.

Where once was rolling farmland and a few small towns, now there's endless mushroom houses being built. "Executive" estates and more "modest" vast homes -- costing 500K to well over 1 million dollars. Hundreds, maybe thousands of them -- across an area that's probably over 500 square miles. There's nothing in the metro area to slow this type of sprawl -- the Twin Cities has no natural boundaries. Maybe one day it will run into the Rocky Mountains.

It looked miserable. We'll miss the orchards -- their days are numbered.

Recently, during a walk through the desolate Atlanta downtown, a particularly persistent panhandler told me that the Twin Cities had more millionaires per capita than any other metro area. I figured he was exagerrating, but these developments give me pause. These are homes for millionaires with rather unremarkable taste -- but evidently there are no lack of such.

One has to assume such a massive concentration of wealth will elect enough politicians to build the highways they'll need* -- but I wonder if the Twin Cities will really cooperate. If not the as yet unbuilt suburban highways will run aground south of the cities -- and the millionaires will be spending hours in their cars. Yech. What a strange way to spend money.

Perhaps the market for personal flying machines will "take off" ...

* The population density isn't all that high in the developments, but they will draw in higher density population in the flatlands. It's the plebian neighbors that will clog the roads.

Update 10/3: A colleague tells me the Savage, Prior Lake, 169 region is among the top five most rapidly developing areas in the nation. So in the peak of a housing craze, this is one of the frothiest bubbles. Thinking more about the traffic problems, all I can figure is either these folks don't have to work or they're combining generational transfers (inheritances) with massive loans to make the initial downpayment, and then paying off the rest in the sweat equity of time spent in traffic. In other words, they're not as wealthy as their homes.
Posted by JGF at 10/02/2005

Email ThisBlogThis!Share to TwitterShare to FacebookShare to Pinterest
Labels: MSP