Four decades of television: last of the rabbit ears 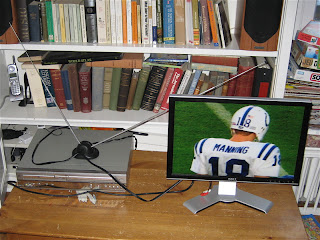 When it comes to television, we're a bit retro. The kids watch Netflix videos (movies and tv) on an ancient CRT, but we don't do broadcast or cable. So when my 10 yo insisted on watching the super bowl while the youngers watched the CRT I had to scramble a bit.

It worked, and I got a kick out of all the decades of technology that were trivially easy to lash together. In an era of Yet Another Proprietary Apple Connector the RCA AV plug is a shining beacon of lost hope.

In front we have a 2006 Dell desktop monitor (HDTV!). The box is a junky DVD/video player with a broken DVD player and a working TV tuner - vintage 2000. Below the table is a vintage 1990 stereo. 1950s era rabbit ears sit atop the box. Fifty years of technology all working together to create a very low end home AV system.

There won't be many more opportunities to put this mash-up together. Broadcast analog television is supposed to end in a year or so, though I personally doubt that will happen. A president may survive the greatest strategic debacle since Japan attacked Pearl Harbor, but ending broadcast TV is a recipe for annihilation.
Posted by JGF at 2/16/2007