The Measure of Things

A colleague forwarded me one of those "interesting emails" which always seem suspicious. This anonymous message was interesting, though mysterious. It consisted of a series of images beginning with the solar system and ending with the star Antares. Once I cracked the mysterious file format. I started looking around to see if I could validate the content.

My search took me to a 2006 web page, but a very interesting faculty page (worth a visit) was probably the origin for the last 3 images (they appear relatively "home grown"). I suspect the email is based on the faculty page. A reference there pointed a physics simulation site as the original source for the first 3 images. I've attached all the images below, you can click on them to see larger images.

First, some order of magnitudes examples to warm up with:

The span from the Planck Length (smallest possible distance) to the Visible Universe is a factor of 10 **61. On a log scale the mid-point is somewhere around the limit of human vision. In other words, there are as many 'scales of 10' between the smallest thing you can see and the smallest thing that can exist as there are between that wee thing and the universe. As Feynman said, there's a lot of room at the bottom.

So if we treat Earth as the measure of all things, let's take a look at some of the stellar objects in the mid-range. First, though, we'll take a look at the 'string' to 'hand' scale from (Seed magazine 2007)

Earth, Venus, Mars, Mercury and the Moon
Earth is only a bit larger than Venus, but Mars is a relative pipsqueak. It's roughly correct to say that Earth is to Mars as Mars is to the utterly barren Moon. 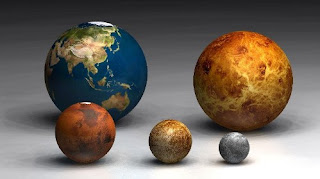 Jupiter, Saturn, Uranus Neptune and the rocky runts of the system. 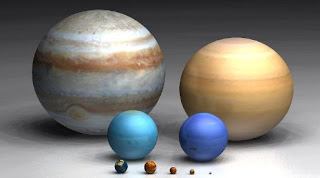 The Sun and its leftovers 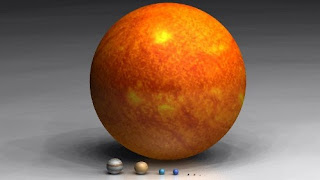 Sun, Sirius, Pollux and Arcturus
Arcturus is about 25 solar diameters across. 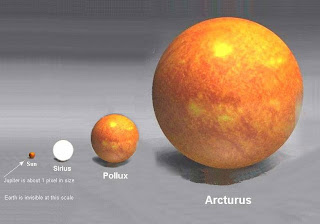 Arcturus, Rigel, Aldebaran, Betelgeuse, Antares
Ten Antares, laid side by side, would span our solar system. An individual human is to Antares as Antares is to our galaxy. 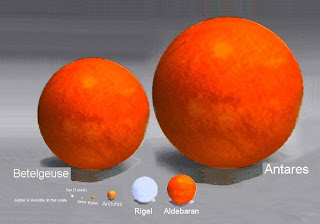 Update 2/4/11: The universe is much bigger than when I wrote this.

Update 5/3/12: Now what we used to call the Universe is merely the Visible Universe, which is some infinitesimal fraction of the multiverse. This Scale of the Universe app (Flash, damnit) is fun to play with. There's a lot of nothing between neutrino's and the quantum foam. I had made some egregious arithmetic errors in my original post and I just corrected them.
Posted by JGF at 3/15/2007