I was wondering the other day, how much gasoline costs in Europe. It's about $3.40 a gallon in the Twin Cities, and over $5.00 a gallon in Canada, but what about in France or Germany? Have gas prices reached the "magic" $7.00 a gallon mark? I'd long imagined that was a price point that would change consumer choices about where to work and live, and what to drive.

Is the effect entirely due to refining capacity, as some suppose? If so, wouldn't the effect differ between the US and Europe?

Once upon a time this would have been a hard question to answer. Tonight Google gave me the answer within a minute of asking the question: Weekly Retail PrPemium Motor Gasoline Prices (Including Taxes) - DOE)

I've graphed [1] the results, click the image below to see a more readable graph (Europeans, of course, have far more taxation on gasoline, that's the big gap in the chart): 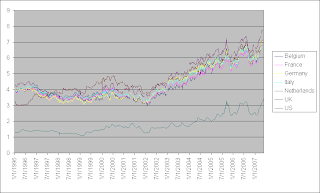 The French price has doubled (2.07x) in a bit more than 6 years and the US prices have more than doubled (2.6x). (I assume the numbers are not corrected for inflation.)

Lately the US prices have risen somewhat faster than the European, that fits with part of the price increase being a refining capacity issue. Overall though there's a reasonably clear trend, albeit with more than a few reversals. If we accept the trend then French gasoline will be $13.50 @ 2013 and $27 @ 2019. I wonder how close this is to the "tipping point" where the ROI on petroleum storage starts to become persuasive.

Without adjusting for income in any way, it's noteworthy that US gasoline is now as expensive as French gasoline @ 2001 and French gasoline today is nearing the "magic" $7/gallon mark. I've long assumed that consumers will only change their behavior substantively when gas passes $7/gallon. It will be interesting to watch what European consumers do now.

[1] I tried to do this without resorting to Excel, but, really, non-Microsoft spreadsheets on the Mac are mediocre and Google's Spreadsheet app is really only a handy list manager. Excel still rules with an iron fist.
Posted by JGF at 5/29/2007