I admit to a certain fondness for my former Canadian passport when I see the Strauss Gap in action. It's not that Canadians are much more enlightened than us, it's more that they are in a different place in their democracy/tyranny cycle.

So I appreciate today's friendly slap from Gail Collins...

... Cheer up, Obama-ites. You’re overreacting. I’ll answer all your questions as long as you promise to take deep breaths into this nice paper bag.

Have you seen the polls? He should be talking more about the economy! Why isn’t his campaign working harder?

If the Obama brain trust seems relatively serene compared with its seething base, it’s because they live in the Electoral College world, where the presidential race only takes place in a third of the country. They don’t care about national polls — a concept as quaint as measuring one’s wealth by caribou pelts. They worry about the undecided vote in Minnesota and Ohio and run their TV ads (about the economy) in places like Colorado and Michigan and Florida. If you live in California or New York or Texas, you don’t really have much of a feel for their level of effort because as far as they’re concerned, you’ve already voted.

I’m beginning to think we should have gone with Hillary Clinton.

Hillary now lives in a golden alternative universe. As soon as the Democrats had actually nominated Obama, they decided that Clinton was by far the better candidate and that they had destroyed their chances by not choosing her. This is the nature of the party. If she had not been in the race, the Democrats would probably be bemoaning the fact that they hadn’t stuck with John Edwards and nailed down the critical swing-state philanderer vote....

...If you really want to see a strange line of attack, take a look at the wolf ad. It cuts from Palin’s face to Obama’s to packs of wolves prowling through the forest, presumably in search of vice-presidential prey. Then comes the text claiming that as Barack drops in the polls, “he’ll try to destroy her.” Given Palin’s affection for shooting wolves from airplanes with high-powered rifles, it’d be more appropriate to have them cowering in their dens while she aims her machine gun from a diving Cessna. 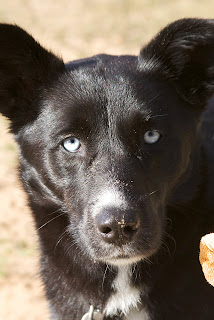 Thanks Gail, I needed that. Molly Ivins would approve.

Allies of the enlightenment, we must face the GOP's bullets of cowardly stupidity. Yes, America may choose to embrace the dark ages and plunge the world into poverty, war, and bleak despair, but we Wolves for Obama must howl against the coming of the Dark.

Kateva has volunteered to be our mascot. True, she's not exactly a wolf, but there's something about the eyes ...