The Economist's endorsement: What's surprising about it.

The Economist has been running a world "electoral college" . Last I looked 80% of their US readers voted for Obama.

That's current readers of The Economist, a journal that used to be rationalist 19th century liberal but became a pale imitation of the Wall Street Journal editorial pages in the 90s. Even this readership, the very heart of McCain's former constituency, is massively pro-Obama.

So I figured the "paper" would endorse Obama. If 80% of the US readership of a WSJed-lite publication wants Obama, they aren't going to be stupid.

Still, in 2000 they endorsed Bush. They never adequately apologized.

In 2004, they weakly, half-heartedly, with poisoned pen, "endorsed" John Kerry as "the incoherent".

So I was expecting a grudging, muttered, meaningless endorsement. 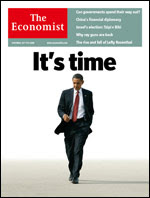 Obama on the cover, striding along. Headline "It's time".

There's nothing poisonous about this endorsement (emphasis mine):

An endorsement of Barack Obama | It's time | The Economist

... all the shortcomings of the campaign, both John McCain and Barack Obama offer hope of national redemption. Now America has to choose between them. The Economist does not have a vote, but if it did, it would cast it for Mr Obama. We do so wholeheartedly ...

They are not forgiven. They will never be forgiven for their 2000 endorsement of GWB.