Once upon a time we had a pretty good collection of educational software for children. 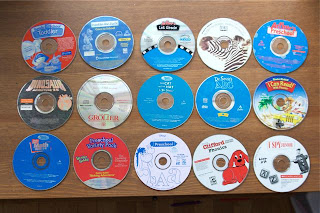 It wasn't quite as good as what we could find in the late 80s and early 90s (Windows 3.1 and especially Mac Classic), but it wasn't too bad. Of course most of it was written for Windows 3.1 and Mac Classic. Very little of it still worked when we gave this set away to people with older machines and younger children.

There's nothing like this software now. In the absence of a reliable and cost-effective distribution channel, a balanced approach to copy prevention (digital rights management), a stable computing platform and a process to eliminate semi-fraudulent garbage software prices were high and the quality was pretty darned lousy.

That market went away.

So is the web a replacement? Is there comparable educational software on the net?

This story gives one answer ...

Be the Best You can Be: Math fact drills for an Asperger's child - two excellent solutions

First I went to the web, where I was again reminded of an old unsolved business problem. We have yet to figure out a way to deliver quality web based software solutions to this kind of niche market. It's not a technology problem, it's a business problem.

The best web solution I could find was Math Playground, and that required digging through heavily ad surrounded sites, sensory overload sites that were annoying even to a non-Asperger's person, dozens of me-too sites, spam sites, suspicious domains, and so on. In other words, lots of junk or marketing efforts.

Once upon a time I might have tried finding educational software for OS X or even (further back) Windows, but that market hasn't just died, it's died a thousand deaths...

Of course there's also the Wii, but those apps tend to be very expensive (Nintendo's cut), heavy on the entertainment, and rarely focal enough for my needs.

So I skipped from the web to the astoundingly successful Apple (iPhone/iTouch) App Store.

There I downloaded five Math Drill apps. Some cost money, some were free. The ones that cost money were all less than $3 so, as far as I was concerned, they were as good as free ...

... Of the five apps I tried only one was a real dud (stupid advertisers), two are excellent, and two are quite usable...

So what does the Apple Apps Store have that the web, desktop OSs, and the Wii don't have? Four things:
With these four advantages the iTouch/iPhone platform and the Apple App Store has created a renaissance in small market, targeted software - a flurry of creativity last seen in the early 80s.

Just imagine what will happen Apple does launch their widely expected netbook-variant, particularly if they bundle it with Amazon's iPhone Kindle app and back to school books ...
Posted by JGF at 3/14/2009