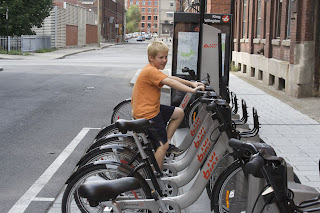 Looks like Minneapolis is going to introduce the public bikes we saw in Montreal ...

" ... Nonprofit Nice Ride Minnesota plans to inaugurate a $3.7 million system of 1,000 heavy-duty bikes and 80 locking kiosks in and around downtown Minneapolis next May. For an annual fee of $60 or a daily charge of $5, you'll be able to take unlimited free rides of up to half an hour between the computerized locking stations..."
We saw quite a few riders on these Bixi ultra-rugged bikes. In Montreal if you exceed the 30 min ride, the cost is another $5 or so. Beyond that the price rises exponentially; the pricing ensures that riders bike between the locking kiosks and that bikes are moved into circulation when not in use. The sheer mass of these low performance/high reliability bikes makes long trips unfeasible anyway.
I don't know if they'll play as well in Minneapolis. As much as I love the Twins, they're not in Montreal's league for tourist attractions. On the other hand, we do have a marvelous network of bicycle paths.
It's a cool experiment. I'll probably buy a one year pass just to help encourage them.
Update 10/30/09: The NYT has some background. The bikes are "Velib", they cost about $3,500 each, and they originated in Paris. Unfortunately, they've become the target of Parisian sociopathies and have been heavily vandalized. I think they'll do a lot better in the Twin Cities.
Update 6/4/10: Visiting Montreal, I noticed a significant problem with the scheme. They now allow no more than two bikes to be charged on one credit card. So if you have one parent and two children, or two parents and three children, you're out of luck.
Posted by JGF at 9/14/2009

This is a great idea. This video shows how you can move an entire apartment using only bikes and a bunch of friends. Might be a bit crazy, but so are most of my bike friends.