Does anyone know what AT&T's smartphone data plan rules really are?

AT&T may add a data plan without approval if a US customer puts their GSM card in a smart phone (iPhone, BB, Windows, etc). They can do this even if the customer bought their own smart phone. They are supposed to send a text notification that the plan will change.
This is an AT&T policy, not an Apple policy. It applies to all AT&T's bandwidth consuming phones. AT&T put this policy in place in Nov 2009.
What AT&T representatives don't know, is the conditions under which AT&T will do this. In three interactions with service representatives I've gotten 3 different answers. The reps were all very certain of themselves, but they can't all be right. The documents I've been able to obtain don't help, though they do suggest the most negative interpretation.
Since my last aggravating interaction, I've done about four weeks of testing with an iPhone 3G I gave to my 13 yo (no Safari, no YouTube, no App Store, no iTunes store - only net apps I install). He has unlimited texting (SMS/MMS) but no data plan. Through AT&T's managed account option I've set his allowed data throughput to zero. During this time AT&T has updated his account to show that he has an iPhone 3G. They have not yet added a data plan. I don't think they will.
I'm guessing, based on interviews with AT&T service reps and my own experience, that these are the rules for mandatory data plan enrollment:
In contrast my son has never had a subsidized phone. He used an old Nokia of mine. I gave him my iPhone (out of contract, but I suspect that doesn't matter), but since he's not under contract with a subsidy he is exempt.
I'll update this post if my son does receive a mandatory data charge, but for now he has an iPod touch that's also a phone with texting. It's a lot cheaper than a 3G data phone.
Note that AT&T's policy, even though it may not apply to us, is unfair in several ways [2]. Their customers are paying for a service they don't want, which is bad enough, but they're also paying the same amounts as people with a subsidized phone. Less obviously this hits all iPhone owners by reducing the resale value of their devices.
AT&T documents 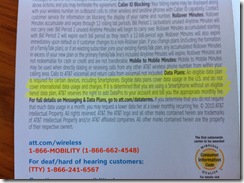 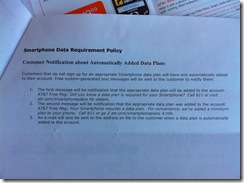 [1] (In iOS4 you can turn off data services but you can't lock this setting, AT&T will data lock a phone but this disables MMS services.)

[2] One rep claimed AT&T will discontinue data charges if someone breaks or loses their smartphone and can no longer make use of the data plan. If so they would lose money, since part of the cost of an iPhone comes from data services. I find it hard to believe they'd do this, but it's the flip side of the policy described above.

Update: I put up an informational post on this topic on Apple's Discussion list. They deleted it within an hour. That's fast! I think the community moderator confused this question with illegal unlocking.

Update 8/12/10: I asked about this on Macintouch.
Update 1/4/11: Five months later AT&T never kicked, never charged us. The answer appears to be that AT&T will support voice/text services on an iPhone for a contract free customer without a data plan. If you have a contract (subsidized phone) however, and switch to an iPhone before your contract concludes, you will be auto-enrolled in a data plan.
Posted by JGF at 8/09/2010

I have a same problem and I'm really mad about it but I don't know what to do!? I switched the sim card back to my old phone for now.I don't wont to get charged for a data plan that I don't need.