On the same day Gail Collins tells us about American aristocrats seeking power, Bob Herbert reminds us (yet again) of an inconvenient truth [5] ...

... The Schott Foundation for Public Education tells us in a new report that the on-time high school graduation rate for black males in 2008 was an abysmal 47 percent, and even worse in several major urban areas — for example, 28 percent in New York City....

...More than 70 percent of black children are born to unwed mothers... Black men ... have nearly a one-third chance of being incarcerated at some point in their lives...

...White families are typically five times as wealthy as black families. More than a third of all black children are growing up in poverty...

Those are bad numbers on several fronts, though it's worth noting that 66% of Icelandic infants are born to unmarried mothers and in 2007 60% of babies born to all American women in their 20s were out of wedlock.

Black Americans are not unique on the educational front either ...

... Data from 2005 is drawn from the seven states with the highest percentage of American Indian and Alaska Native students as well as five states in the Pacific and Northwestern regions of the United States ... On average, less than 50% of Native students in these twelve states graduate each year.

Public education isn't even working that well at our above average elementary school and state of Minnesota (in 2007 the St Paul school District was ... "30 percent Asian [2], 30 percent black, 26 percent white and 13 percent Hispanic" [1]) ... 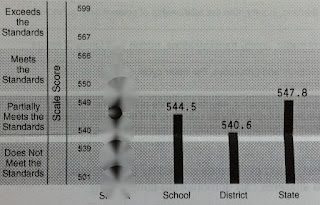 Herbert is right that American blacks, and especially black men, are in serious trouble. At least when it comes to education though, they're not alone. Their trouble is a leading indicator for a lot of others.

So maybe we should beat up on the teachers? I can think of many ways reading and math [4] education and student assessment could be improved, but, at least for the particular St Paul school in the above graphic, I believe the teachers are pretty good to excellent. Some teacher-kid-parent combinations work better than others, but those teachers aren't the problem.

Ok, maybe we should beat up on the parents? Oh, wait, I'm a parent. Skip that one.

Maybe we should get better students? That does work. They used the better student method to improve test schools in Bush era Houston and in Mississippi. Health providers have long used similar techniques to improve health care outcomes. True, this is the same way wolves contribute to the health of caribou, but we don't eat the losers. We house them.

Hmm. So we can't beat up the teachers, we can't pummel the parents, and eliminating the weak kids is kind of cheating. So what's left?

Maybe we need to rethink the goals of our educational enterprise. Maybe, in a turbulent world of rapid change, we need to have different options for different kids. In 2020 it's not hard to imagine that a skilled gardener might have better employment opportunities than an accountant or a dermatologist.

Maybe we need to restart with the end in mind.

[1] In Minnesota white flight is often to "Charter" schools.
[2] Large Hmong population.
[3] A nonsensical statement since skills are relative to teacher, student, class topic and so on.
[4] Die Everyday Math, Die!
[5] Glenn Loury, writing for the Boston Review in 2007 about American imprisonment, said much the same thing ...


... a central reality of our time is the fact that there has opened a wide racial gap in the acquisition of cognitive skills, the extent of law-abidingness, the stability of family relations, the attachment to the work force, and the like. This disparity in human development is, as a historical matter, rooted in political, economic, social, and cultural factors peculiar to this society and reflective of its unlovely racial history: it is a societal, not communal or personal, achievement....

This post on how bad statistics led to a blunder in evaluating small schools is very relevant. With most Pay for Performance initiatives mall schools are randomly rewarded and randomly punished for normal fluctuations in the composition of the student body. The same thing will happen to small health care facilities.
Posted by JGF at 8/21/2010