How can we best understand what's recently changed in American government?

First, we need to simplify. Any government, but especially a democracy, is a dynamic and chaotic sum of numerous conflicting powers.

Some of these powers are made of atoms - billionaires, CEOs, the well employed, the weak.

Others rule a different realm. Corporations are partly the will of their managers, partly powerful but dull amoeboid rulers of org space, changing their environment to suit their nature.

I think we should reduce this chaos to three agents: The corporation (private and public), the strong (healthy and wealthy) and the weak (30% of humanity). These agents are not enemies; they are sometimes allies, sometimes frenemies. Some corporations need employees and all need customers. The strong may love the weak, or at least may not want them rioting. The weak need the strong - and they need work.

This is how I imagine the American government was balanced in the spring of 2010: 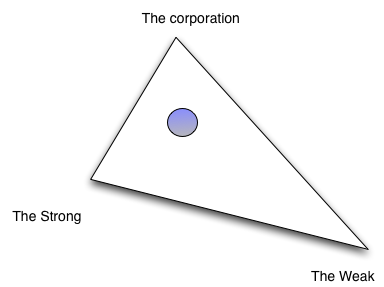 This is how I think it will look in the winter of 2011, once the GOP takes the House 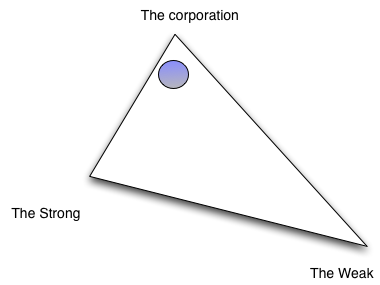 This was a very good election for corporations. Or so they think, but of course what they want isn't necessarily what they need.

I see that your neigboring MSP suburbanites in the 6th district voted back the ravingest loon in the pond again. I thought Minnesotans were all reasonable & serious & stuff.

Yes, Bachman is our special gift to America. I hope you appreciate her.

Alas, Minnesotans are very much American in miniature.