In the 90s I taught physicians how to use the Internet. It gave me an excuse to attend Society of Teachers of Family Medicine and American Academy of Family Practice conferences. I didn't use PowerPoint, my "slides" were a set of web pages shared between different frames, like a slide on Digital's Alta Vista Search Engine: 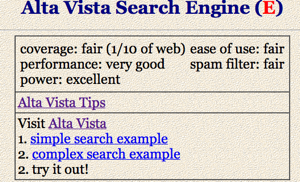 Matches may be required, or prohibited. Precede a required word or phrase with + and a prohibited one with -. This query finds documents containing film and noir, but not containing pinot noir.

There are about 800 million web pages that are publicly accessible (Feb. 1999 [1]). This excludes, for example, the New York Times and the Encyclopedia Brittanica! These are the pages that a search engine can find for you.

Until 1999 the best search engine was AltaVista. It had about the widest coverage (16% [1],[2]), very good performance, and a powerful but slightly complex search language. When AltaVista failed, Profusion was a great way to try every other useful search engine.

Then came Google, and everybody else became history.

This document introduces Google, and talks about how to use AltaVista and Profusion on those occasions that Google doesn't succeed.

Google crushed Alta Vista in the mid 90s. After that things went downhill - for Digital (acquired by short lived Compaq) as well as Alta Vista. I remember a strange project in the twilight years, a Snow Crash/Neuromancer inspired Alta Vista virtual office tower for business in cyberspace. I had an address there. It was kind of silly.

Even in the twilight years though, Alta Vista had a good translation service. I missed Alta Vista's "near" operator, even though Google searches were much better (Google now has it).

RIP Alta Vista. Historians will forget there was anything before Google. The truth is Alta Vista was pretty good, and if Google had never existed the web might have been much the same.