Brazil is, for Americans, the invisible nation. There are 190 million Brazilians; it's the world's fifth largest country and, by GDP, eight largest economy and growing fast. I'd love to visit Brazil [2].

Brazil is also nation where survivors of mudslides are walking out from a natural disaster ...

Those who escaped the slides that killed nearly 600 people over four days ferried bottles of water and sacks of groceries on their backs after trekking five miles to the center of this mountain town north of Rio de Janeiro.

Wanderson Ferreira de Carvalho, 27, lost 23 members of his family, including his father, his wife and 2-year-old son. He trudged up a path to his neighborhood, carrying supplies.

“We have to help those who are alive,” he said. “I’ve cried a lot and sometimes my mind goes blank, and I almost forget what happened. But we have to do what we must to help the living.”

Local and state fire departments said they had deployed 2,500 rescuers, while 225 federal policeman were in the area to maintain order. The federal government has been trying to fly in 11 helicopters to remote areas, but has found it hard because of poor weather conditions.

That's the full text of the entire NYT article.

Terosopolis isn't, on a map, that far from Rio ... 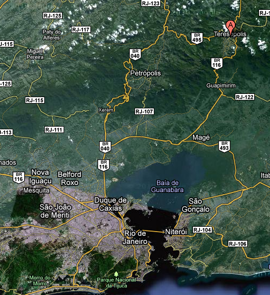 Rio is to the left of the great bay, Teresopolis is the A icon. Terosopolis is within 250 (spectacular looking) kilometers of the city.

I'm not moralizing about Brazil. America is far wealthier than Brazil, but we struggled to manage Katrina. (The stories of the Coast Guard response to Katrina, incidentally, are awe inspiring).

I just wish I, and we, had a better way to share and understand the fascinating and terrible world that we live in. We see only slices and shards of it. My hope is that even though today's machine translation only works  for very closely related languages (ex: English, French, German) that it will improve dramatically in the next decade. When that time comes Google News (or the future equivalent) may reveal the invisible world. Maybe, one day, even Chicago.

[1] Of course, it may also be that Chicago is grumpily dull. It's a corrupt old city, but it's been more corrupt in the past. It mostly seems to work. The weather is miserable, worse in its own way than Minneapolis, but the regional population is stable. Of course if it turns into Detroit then it will get a bit of attention.
[2] I roamed once. That was a prior life. I hope to have a few more lives yet.