A student of mine grew up in Suzhou, China; she left about six years ago. It was, she said, an  hour west of Shanghai, and had a population of about 1 million.

Google Earth still shows a gap of green between Suzhou and Shanghai, but that will not last long.

When I asked how her home differed from a city like Houston, she said it was much more compact, and that it was a continuous landscape of towers - "downtown" everywhere. I imagined something like downtown Chicago, but more widespread.

I imagined wrong. This is a random grab from Google Earth ... 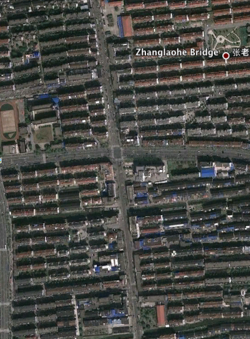 "Downtown everywhere" was probably a language limitation. From Google Earth photos I see that each building brick is a multi-story apartment building. Many thousands of them, each holding hundreds to thousands of people. Much of Suzhou is now a continuous landscape of identical residential multi-story housing units.

Email ThisBlogThis!Share to TwitterShare to FacebookShare to Pinterest
Labels: China