Tools I use: iOS 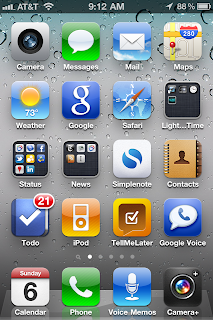 When I write about software tools and services, I usually write about what's new or what's broken.

I don't write much about the tools I use all the time. Tools that work at least well enough.

I'm not alone in this. It's unfortunate, because Tools that Work are what I'm really interested in! There's an information-market failure going on.

In the spirit of lighting a single diode, I'm going to write periodically about the Tools I Use (see tag). I'll start with the tools I use on my iPhone. Most of these are on the start page of my iPhone, though a few there are still experimental. (On first posting I've no links here, I'll add those later.)

Calendar: I use iOS Calendar with my employer's Exchange Server and with Google's ActiveSync server. I currently use 13 distinct Google managed calendar feeds out of the @18 feeds registered with my Google Calendar.

Voice Memos: I've tried several alternatives, but Apple's version does what I need well enough. Most of all, on an iPhone 4, it loads quickly. Most competitors take too long to load. I like the integration with the iPhone earset controls.

Camera+: I like the speed of image acquisition, and especially the ability to quickly specify focus and exposure targets.

Todo.app: I sync it with ToodleDo. ToDo.app is very fine; ToodleDo is an odd mixture of excellent and inadequate.

Spotlight: I wish it searched more things, but I rely on it more and more.

iPod: Especially In Our Time podcasts. If only Apple would fix the 3 year old $!$#@ last listened bug.

Google Voice: I have used it about five times a week for years to call Canada from my cell phone. The quality is now, usually, excellent. It costs nothing. GV alone pays for my iPhone.

SimpleNote: I'm very glad I get to pay yearly for their sync service. I want the vendor to stay healthy. I sync it to Notational Velocity on OS X and ResophNotes on XP.

Contacts: My iOS Contacts app syncs to my employer's Exchange Server and to MobileMe Contacts. It's a long story. My Contact sync setup is complex and perhaps impossible to replicate, but it works across multiple OS X Mail.app instances, Gmail, and my iPhone.

TWC: The weather app that works well enough for me. I could see replacing it, but there are no ads in the one I own. I need to move this to my main screen.

Clock: I use the iOS Timer app very frequently. It's a kid thing.

Night Stand: Beside alarm clock when traveling and iPhone powered.

Latitude: My son likes to know where I am. I think Emily will start using this too.

Facebook: FB is more evil than most, but I like to see what my friends are up to. It's a vice.

Reeder: I used to use NYTimes.app, but I've switched to following NTY feeds via Reeder. Not perfect since they're partial feeds, but better than NYTimes.app. For every other feed source Reeder rules. Reeder generates the Google Share notes that also create my Twitter stream. I use this a lot.

Google News: The only web-app I regularly use. Works very well.

Maps: This iOS app is underrated. It's deep and subtle. It is strange, however, that Spotlight offers options to do searches via Google and Wikipedia, but not via Maps.

Mail: This iOS apps syncs via ActiveSync to Google Mail and to my corporate Exchange Server. Having corporate mail on my iPhone has been a dramatic help.

Messages: I resisted texting because I hated paying the super-high-margins fee to AT&T. We tried IM for quite a while, but it didn't fly. So now I text. Frequently.

Safari/Google.app: Inevitably. I find the voice search and search history on Google App marginally interesting, and it speeds access to Google Docs (though I very rarely use that).

1Password: I wish I had an encrypted database app that would painlessly sync to FileMaker. I don't, so this is the next best thing.

i41CX+: The HP41C that dare not speak its name. (Trademark.) The work of a madman who benefits all.

Email ThisBlogThis!Share to TwitterShare to FacebookShare to Pinterest
Labels: iphone, technology, Tools I Use

Thanks for posting this! That i41CX+ is pretty awesome. I've still got my old 41CV, which Cassandra used in HS until some keys got flaky (not to mention the battery hassle). Good thing I still have the manuals.