Denialists in favor of a warmer earth

Talking Points attended a denialist gathering and brought back this poster photo .... 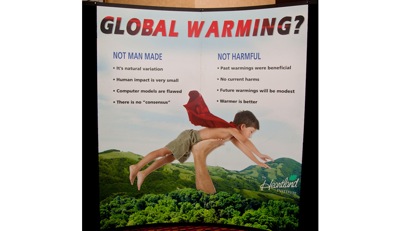 What caught my attention is that the flat earthers no longer deny that the earth is warming. Their new member-mandatory beliefs are:

This is a slightly more interesting flavor of nonsense. Even though these beliefs spring from tribal identity rather than science, they can be evaluated in a scientific framework.

The first thesis is the weakest. If anything, solar output may be transiently declining. The sun certainly does not appear to be increasing its temperature output. If anything natural variation is mitigating human warming.

The second is more interesting. A slow warming of the earth would shift ecosystems. Tropical animals, like low population pre-industrial humans, would probably benefit from a mild, slowish, warming.  Rapid warming in a world of 8+ billion post-industrial humans is another matter entirely. I can't see that going well, though some countries (Oh, Canada) may do better than others (China, coal is not your friend).

We may yet envy the polar bears.