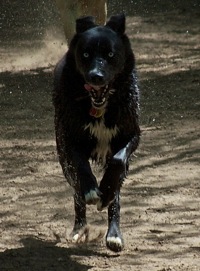 The good news is that Kateva's creatinine is back where it should be and her stomach is holding out. The bad news is that, even if all goes well, her feast on a friend's Rimadyl will end up costing over $1,500 for a straightforward 3 day hospital stay.

Please remember this. Rimadyl, an ibuprofen-like drug sold in the US veterinary market, is beef flavored. It's dog candy, just like the yummy children's aspirin that poisoned my childhood peers. We're used to our evil canine cur stealing food, but we misclassified the drugs as ... not food. She had a different classification. (Unfortunately, she's learned to hide food wrappers, so it took us a day to figure out where the Rimadyl went.)

Poisoned medicinal candy precautions are one lesson from Kateva's folly. It's not the only lesson though.

Once upon a time $1,500 would have covered the costs of a similarly routine human hospitalization. Around that time a time a similarly troublesome dog would have received much less care for much less money.

Health care inflation in the US applies to humans, dogs and cats alike.

On the other hand, veterinarians are paid substantially less than physicians. Veterinary care has much less regulatory overhead, and is much more efficient. There is minimal marketing, very simple billing, and a largely market based payment system.

It would be interesting to plot the trajectory of American veterinary and human health care cost inflation. I think the curves would look quite different, largely due to lower end of life costs. I don't know though; there may be surprises. Curiously, I don't think this study has been done.