It's not hard to do the numbers.

There are billions of people in the world and trillions of stories. Every day someone has a one in a million weird event.

Today was my turn.

It happened while I was using Google maps to visit my aunt's new residence in San Francisco. I clicked the zoom button for more detail.

Suddenly I was looking at dark green forest. I wasn't in San Francisco any more.

I zoomed out, and I found I was visiting the wilderness of British Columbia's Mount Garibaldi. It look something like this: 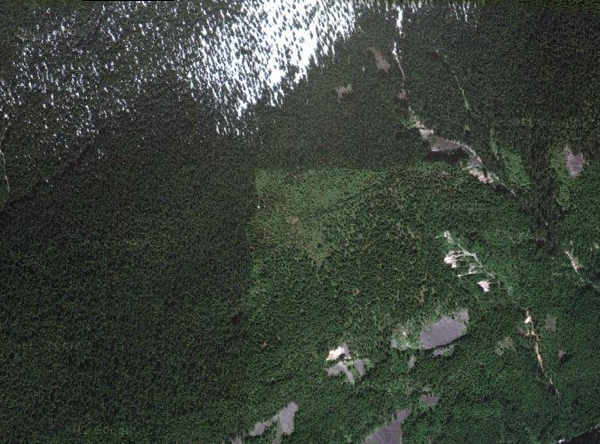 I zoomed in and out and suddenly I was back in San Francisco.

No big deal, just a glitch in the maps.

Except I have a connection to that part of the world. My brother Brian Faughnan vanished not far from there in July of 2002. He left his Whistler youth hostel room to go high alpine exploring - solo, off trail. Yes, that's at the far end of the risk spectrum.

There was a search but we never found a body. We searched Rainbow Mountain, because he could walk to that and he'd spoken of it. We did make a few inquiries about Garibaldi though. It's a beautiful destination, and he could have hitched a ride there.

So perhaps I was visiting his grave. It is certainly a beautiful and dramatic resting place.

Curious, I googled Garibaldi and Faughnan and tuned up a journalist's story I didn't remember and a post by Matt Gunn who met him in Vancouver before he was lost:

Brian Faughnan went missing in the whislter backcountry in the summer of 2002. An extensive search failed to turn up any evidence about what happened. I met brian a few days before his disappearance while working at MEC and answered some questions he had about good hiking and scrambling destinations. We discussed rainbow mountain, which is where the search team believes he went missing. This story is a real tragedy and reminds me of the inherent danger of hiking alone.

There is a sequel to the story. I still wear a technical shell we found amongst Brian's gear. It's very faded, but it works. Tonight I thought I'd left it at an ice rink; so the kids and I went to look. We found it in my gear, but, for the first time in a while, we talked about my brother.

My 14 yo was five when Brian was lost, but he remembers more than I thought. He even mentioned Rainbow Mountain. We spoke about my brother for a while.

One of the very hardest things I've ever done was to call my 5 yo son from Vancouver and tell him we hadn't found his Uncle Brian.

These are tales for the dark nights of winter.

Update 12/6/11: I shared this story on Facebook the night I published it. A friend of Brian's, who lives in Vancouver responded that she new Matt Gunn. Then Matt Gunn replied.

Email ThisBlogThis!Share to TwitterShare to FacebookShare to Pinterest
Labels: other, personal

Thanks for sharing this. As you say, the odds are such that these sort of things just happen. The importance is what we make of them. My father had passed away in his early sixties and while I haven't had anything so serendipitous happen I do still try to note similarly events in my life as an opportunity to talk about him.