Ancient Rome in a nutshell

One of my weekly pleasures is writing up adapted history notes for a special needs high school student. I love doing it; his 9th grade history book (Ellis and Esler, World History, Prentice Hall) is well written and lines up fairly closely with the adult material I consume, including In Our Time's superb history curriculum. The exercise is filling the background gaps in my spotty knowledge of today's version of world history.

It's not hard to write the digests in a form he can use with his assignments. I'm surprised there aren't adapted versions of these school texts. Perhaps someone will do them using Apple's new iBook toolset for the creation and distribution of low cost textbooks. Heck, I'd do it, but the list of things I need to do is rather long.

I particularly enjoyed Chinese history, until that exercise it had seemed impenetrably complex. This week was Ancient Rome. I was struck by the role of population growth, climate instability, large scale migrations, public health breakdown and epidemic spread, and economic inequality and government corruption in the fall of Rome. Nothing familiar about that!

For your reading pleasure -- the adapted version of 9th grade Roman History in a medium-sized blog post. It's more or less written for something between a 3rd and 5th grade reading level.

Rome’s Empire included everything around the Mediterranean sea and then all of modern France and the southern part of modern England. Rome was the center of the Empire, it is in the brown box below. Today we call that land Italy. 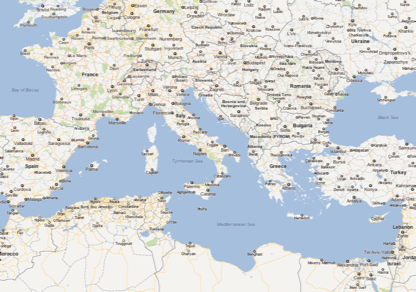 Rome had a very great impact on the history of Europe and the Mediterranean.

Rome had many great writers. Rome developed the Stoic philosophy.

Roman developed their own style of Art and Buildings (architecture) and learned how to make big and strong bridges and buildings and roads. Romans invented ways to carry water into Romain cities and how to get rid of human urine and stool (plumbing).  This meant Roman cities could grow large with less disease.

Romans learned to make very good maps, and to avoid the spread of diseases.

Rome developed a strong system of laws. Roman laws are the basis of American, European, and other legal systems today.

The Roman-Jewish religion of Christianity spread all over the world and continues today.

The Growth of Roman Christianity

Christianity started in a Roman land called Judea, the land of the Jewish people. It started as a Jewish sect (cult) based on the idea of a Savior or Messiah called Jesus Christ born around the year 0 AD. Our calendar is based on the year of Jesus Christ birth.

Christianity grew because it allowed non-Jews to join. Christians were supposed to protect one another and when it developed there was a lot fighting and danger. So it was safer to become Christian.

Christians believed it was important for rich and powerful people to help poor and weak people. Even slaves could become Christian. There were a lot of poor people in the Roman empire after 100 AD so Christianity grew quickly.

Christianity also took some ideas from Roman Stoicism, so many powerful Stoics liked it.

Why did the people of ancient Italy (Rome) build a lasting empire?

An Empire is a large area with many languages and cultures controlled by a single nation for many years. Rome controlled one of the largest and most long lasting Empires in human history.

There were several things about of Rome’s geography, neighbors and culture that helped them build a big empire.

Geography: The Italian Peninsula (land of ancient Rome) is a long narrow region of land surrounded on 3 sides by the Mediterranean with a mountainous area in the North. It is protected from invasion. In the peninsula there is good land for growing food. The peninsula is easier to travel across than Greece.

Government: The Romans invented a system of government that worked well for hundreds of years. Even if a powerful ruler died, the nation of Rome would continue. Their system balanced the power of the rich and the power of the average person.

Leadership: When Rome conquered a country they let the people live and manage their affairs. The people could become Roman citizens. They learned the Roman language. Rome took taxes but protected them.

Why did the Roman Empire Decay and Fall?

After about 0 AD Rome was ruled by dictators (Emperors). This form of government has problems. People got to be Emperor by military power or friends or family, not because they were good at governing. Good Emperors were replaced by Bad Emperors. Emperors could do what they wanted, nobody could prevent bad choices.

Emperors took money and gave it to their friends and family.  They used more and more slavery.

Rome had more poor people and more slaves. Instead of improving things and trying new ideas they used more slaves. Rome needed more money and slaves to keep going, so Rome conquered more lands.  Even as Rome got bigger it was getting socially weaker. Rome depended on slaves now, but slaves did not like Rome.

At the same time human populations were getting bigger around the world and the world’s climate was also changing. It changed a lot between 250 and 500 AD, sometimes hotter, sometimes drier, sometimes colder. There were some years with good weather and good harvests, then years with bad years and bad harvests. During bad years lots of people would move around looking for better lands.

Growing numbers and changing weather meant lots of people were forced to move from the North and East of Europe and Asia into Italy, looking for land and food and a place to live. They were constantly invading the Italian Peninsula even as Rome was getting weaker.

In the Italian Peninsula more migration and more population and less government meant it was easier for diseases to spread. Huge plagues, like the Black Death, attacked Rome.

Well, shucks I was hoping for the next western civ in great big bites. Not yet, huh?