Facebook and financing a new Vikings stadium: it's a messy world

My Facebook stream has been telling me what my friends read and the movies they watch.

So far, nothing too surprising.  I'm tempted to click on some of them.

Some of them are click-safe. Others are wee traps. By clicking on them I'm authorizing the apps to share some of the things I read or watch. Robert Wright at The Atlantic has the details.

Take a friend's whale video for example. His post doesn't look like an "app post". There's no "hide this app" option for it. Alas, those cues are so 2011. Apps are more covert now. When I click on the link I get this this dialog from "Chill.com" 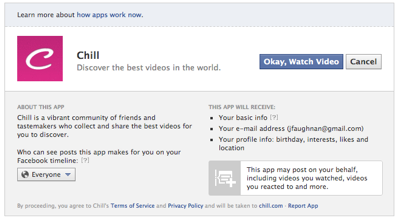 Facebook, like Google+, is incorrigible. There will be a bit of an upset about this, but not as much as with their last 50 violations.

So why do I stick with Facebook when most of my geek friends have left it?

Because it's still where the non-geeks are. The kids on my son's baseball team don't all have email (or don't use it). They don't all have mobile phones with text plans (and besides, mass texting is a pain). They do all, however, use Facebook. So to communicate them I put up a Facebook Page for the team. Same thing with our inline skating club and our special hockey team.

I put Facebook in the same bucket as the state gambling operations we're using to fund a new football stadium for the Minnesota Vikings (just in time for the twilight of American football). State lotteries and the like are a tax on people who are bad at math -- or who just need a bit of hope. We'd never get stadium funding by taxing income or real estate, but voters are willing to tax the poor. Facebook is just another annoying part of the imperfect world we make the best of.