Calculators are really weird tech, but their time may finally pass

My 8th grader needed a 'scientific calculator'. I looked at the requirements, and it seemed that my 1980s Made in Singapore HP 32SII would work quite well. [1] 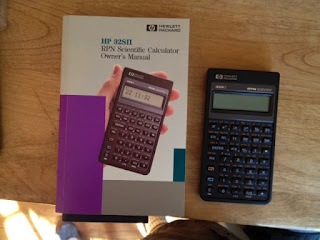 Of course many things from 1980 still work. Pencils, rulers, and notebooks haven't changed much (pens have improved). A computer from 1980 though is a museum piece.

So why is my old HP still better than most of the modern alternatives? (Not to mention it comes with a massive manual.)

It's because calculators are weird tech. They exist because they were perfected decades ago for a set of tasks that haven't changed in centuries. The i41CX+ (HP-41 emulator, vintage 1979) app on my iPhone (below) has more RPN power than the 32SII, but the physical buttons mean the 32SII is a better calculator. 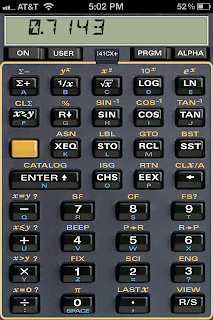 They also exist because schools haven't been able to base their curricula on symbolic math software and spreadsheets. A shoddy but useable modern calculator costs about as much as a set of notebooks -- so it's a reasonable universal requirement.

The time of the calculator, however, may be coming to an end. By next year it's estimated that half of the phones in the world will be full fledged computers. My son's H2O Wireless iPhone 4 (not allowed in school) runs the i41CX+, but it also runs Wolfram Algebra. So does the iPod touch, and the Nexus 7 certainly could. The much heralded iPad Mini will probably debut at $250, but will drop to $200. Eventually, perhaps before I die, some device will make my 1998 "Cereal Box" $20 prediction come true.

[1] Yeah, he might lose it and they sell for $170 for Amazon. OTOH, it's just sitting in my drawer. I've not used it in years; I have spreadsheets and symbolic math and google math and my i41CX+ emulator. So better it get some use. Also, who's going to steal an old-grody looking RPN calculator than almost nobody knows how to use? Not to mention if someone takes it, it will be kind of obvious.