And now for something completely different.

This posts consists of two warnings about gerbils, the weird and probably inbred [1] semi-domesticated desert rat of Mongolia formally known as Meriones unguiculatus.

The first warning is that you shouldn't let your kids be exposed to a school gerbil that is going to be fed to the school snake unless someone adopts it.

If this warning arrives too late, then you need to read the surprisingly detailed wikipedia entry and this UK article on Gerbil Health. From both you will learn about the Achilles tooth:

Gerbils can sometimes lose teeth ...  the first sign of this can be that the animal looses weight due to not being able to gnaw their food - they will stop chewing cardboard quite a while before this so if your pet is not destroying cardboard boxes with its normal enthusiasm have a look at its teeth.

If your gerbil looses one or more front teeth it is essential that any remaining teeth are trimmed by the vet every 2-3 weeks... 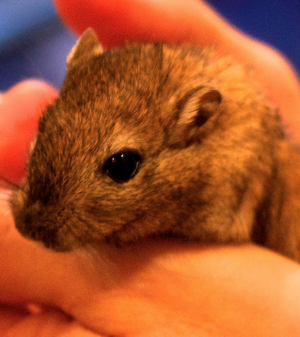 Teeth, it turns out, are a rodent's curse. A pet gerbil can lose its tail and do well, but if anything disrupts chewing the teeth will grow until the gerbil dies [2].

Which brings me to the second warning. Don't buy your gerbil a house ... 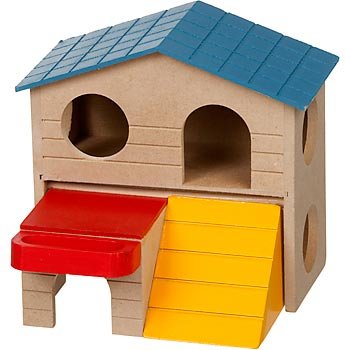 These cute things are held together by tacks (and probably, since they're made in China, lead paint and radioactive waste). Gerbils, which live (and die) by chewing can chomp into the tacks and break a tooth. This is not a good thing. Don't buy these. Consider instead Totally Chewbular Tubes and Critter Caves.

You have been warned. No gerbils. If the kids get one, then no damned tack houses.

You're welcome. I don't think I'll have anything more to say about gerbils.

[1] Between 20 and 50% of all pet gerbils have the epilepsy. (according to Gerbil Health)
[2] Vets claim they don't tolerate suffering -- they dwindle and die instead. The lack of capacity for suffering implies that the great Programmer likes rodents, and that one escape from Samsara might be cyclic reincarnation as a gerbil.

Update 10/18/2012: Much to our surprise, a mere month later, he's fat and happy with both his upper teeth. He ended up having to regenerate two front teeth. During the long healing process he became addicted to Emily's deluxe ground gerbil food, devouring a dish in seconds. He's probably doubled his weight from his low famished state.