How and when will Apple give up on Siri?

I usually wait for my iPhone upgrades, but I was an early 4S adapter. That meant I used Siri when she worked.

She didn't work for very long. Apple couldn't scale the Mathematica code that underpins Siri. Over the past eight months I've seen some good days, but since the iPhone 5 launch the service has been largely worthless for me. Soon the iPad Mini will come and I expect things to get worse. 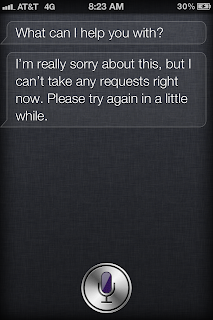 So how long will Apple keep trying to make Siri work? Maybe it's just a matter of building enough data centers, but perhaps Apple bet on the wrong technology. Maybe it's not economical to scale Siri.

So what can Apple do? What might they be doing now?

Despite my prior comparison to the Newton, things aren't quite as dire as all that. The iPhone is very useful without Siri, and since most of us don't rely onSiri there's not much true functionality to remove. Apple can focus on a few key hands free voice recognition areas and re-implement those partly in iOS and partly on a non-Mathematica server foundation. Scaling can then focus on those key areas. The AI part of Siri can then be treated as a toy -- until Apple can either scale it out or replace it.

I hope they're well along in this process, because I sure would like to be able to set a hands-free reminder or take a memo.

Update: Clark had a good takedown of my Mathematica aspersions. He's right, Mathematica isn't the problem. He says he's in love with Siri, but reading between the lines his experiences aren't really much better than mine. He's just overlooking her flaws after a few dates. Soon he'll be ranting with me.

I suspect iPhone 5 users have a better experience than 4S users thanks to better noise canceling, and I wonder if some users do better based on time zones, carrier, and geographic server assignment. I liked this suggestion:

I suspect they’re going to have to move more of the analysis onto the phone rather than the server. However I bet memory issues are the biggest limit there. What we might find, if this theory is correct, is that Siri will make some drastic improvements as RAM on devices hits 2 – 4 GB and Apple can move more code off the servers.3

Email ThisBlogThis!Share to TwitterShare to FacebookShare to Pinterest
Labels: iphone