Ok, so it wasn’t him personally, and it’s not mileage, and I don’t exactly own the health care “IT” industry. Even so, I can better imagine now what it was like to work for GM in the 70s when mileage standards were first set.

For my industry the ‘mileage standards’ are known as ‘meaningful use’, as in MU1, MU2 and MU3. Despite the confusing name these are effectively increasingly stringent performance standards for electronic health records, akin to mileage and emission standards for automobiles. They’re reshaping the industry, sometimes for better and sometimes for worse. (Should we, for example, measure the value of all of our measuring before we do more measuring?)

The industry has moved through MU1 and is now digesting MU2 with MU3 on the horizon (assuming Obama wins, though Gingrich was a great fan of this sort of thing.) MU3 is still under construction, but one consideration is the inclusion of ‘usability standards’.

For various reasons I’m not thrilled with the idea of setting usability standards, but the term is broad enough to include something I think we really ought to study: The impact of complex clinical documentation and workflow systems on the limited cognition and decision making budget of the human brain… 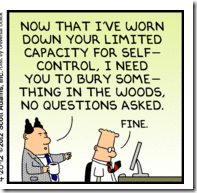 I’ve written about this before …

Llamas and my stegosaurus: Living with a limited brain
Some interesting research has come out recently about the processing capacity of brains. For example, that the medial prefrontal cortex can only handle two tasks at once, or that working memory can only handle about 7 items at a time (but what's an item?), or that when people are actively trying to remember something complicated, their impulse control is reduced…

Since then this topic has gotten a bit more attention, particularly from a study of Israeli judges …

Do You Suffer From Decision Fatigue- - NYTimes.com 8/2011

… There was a pattern to the parole board’s decisions, but it wasn’t related to the men’s ethnic backgrounds, crimes or sentences. It was all about timing, as researchers discovered by analyzing more than 1,100 decisions over the course of a year. Judges, who would hear the prisoners’ appeals and then get advice from the other members of the board, approved parole in about a third of the cases, but the probability of being paroled fluctuated wildly throughout the day. Prisoners who appeared early in the morning received parole about 70 percent of the time, while those who appeared late in the day were paroled less than 10 percent of the time…

… Decision fatigue helps explain why ordinarily sensible people get angry at colleagues and families, splurge on clothes, buy junk food at the supermarket and can’t resist the dealer’s offer to rustproof their new car. No matter how rational and high-minded you try to be, you can’t make decision after decision without paying a biological price….

… These experiments demonstrated that there is a finite store of mental energy for exerting self-control. When people fended off the temptation to scarf down M&M’s or freshly baked chocolate-chip cookies, they were then less able to resist other temptations….

Patient care is an endless series of decisions (though over time more behavior, for worse and for better, becomes automatic). All physicians start with a cognitive budget for decision making, and every decision depletes it. Unfortunately using an EHR also consumes decision making capacity – perhaps far more than use of a paper records. There’ve been a few studies over the past fifteen years hinting at this, but they’ve gone largely unnoticed.

So, if we’re going to study ‘usability’, let’s specifically study the impact of various electronic health records on cognitive budgets. We now know how to do those experiments, so let’s put some of that MU3 money to good use, towards supporting tools that enable better decisions – because they’re less tiring.

Think of it as meeting mileage standards through aerodynamic design.