My two home towns are Minneapolis and Montreal. They have quite a bit in common, though on this trip I was struck by how much diverse manufacturing Montreal has.

Both cities, for example, have a superb network of bicycle trails and public parks. Minneapolis bicycling is rated #1 or #2 in the US, and Montreal is #1 or #2 in North America. In the winter they both feature extensive urban cross-country ski networks.

On my prior winter visits to the Old Country I have rented nordic skis at Mt Royal (excellent!), but this trip I needed something closer to my parent's home. I chose Parc-nature du Bois-de-Liesse, one of Montreal's 17 "grands parcs".

It was somewhat familiar territory. In the mid 20th century I bicycled country roads and walked wooded areas in this part of the island. Most of that is now industrial park and residential land, but a good section of the forested area became a park in the 1980s.

The park has two attractive chalets, shown on this Google satellite photo as 'A' and 'B': 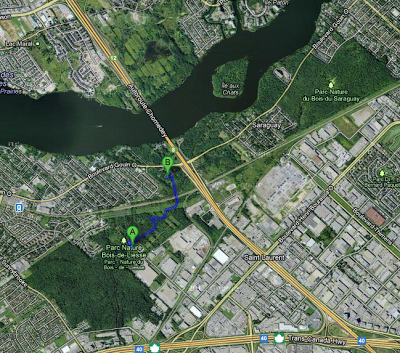 B is "La Maison" Pitfield on 9432 Gouin West. There used to be a restaurant there but sadly it's been closed. It's an attractive building, I think it was built by the Pitfield family who owned the wooded land I once bicycled through. A is at 3555 Douglas B. Floreani, this is a newer building of a similar style. (I got lost finding it; Nav software is recommended! I use Navigon when I visit Canada as it doesn't require a data connection to work. [1])

Site A has the ski rental operation. For a token fee of $8/hour I got first rate gear, comparable to my own waxless skis. There's a parking fee, but on Sundays you can park on the street and walk a bit. There are no trail fees.

In theory there are about 15km of trails of which 6.3km are "expert", but many of the trails overlap and the "expert" trails is beginner-intermediate. A good skier with decent wax could do the entire system in about 1-2 hours: 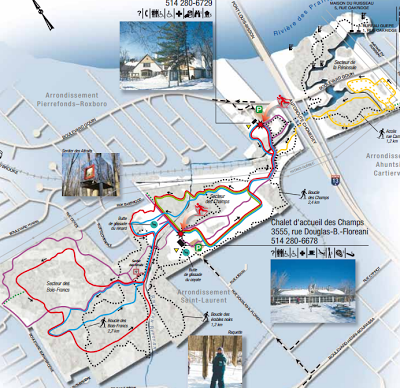 The trails are largely groomed for classic skiing; some segments are two way - that can be tricky. I was barreling along when I looked up and realized that a panic stricken family was only 30 yards ahead (easily avoided). Grooming is more than adequate, though not "state of the high tech art".

On a Sunday there are many skiers of all ages but the route is quiet. On weekdays I'm told there are few skiers, but you would hear traffic noise in a few limited sections. I read a review complaining that it felt "urban"; I wonder if they got it mixed up with another system. Yes, there are some houses near the perimeter, but it is, after all, within a city. I thought it was exceedingly pleasant, though I did spend much of the trail racing against a younger rival who was about my speed. (I'm not sure she realized she was in a race - but I think she did.)

There are no ski trails east of Autoroute 13; it's snowshoe only and this park does not allow skis on the snowshoe trails. Alas, there's no skijoring at all (many MN parks allow skijoring on snowshoe trails and some ski trails). There is a small sledding hill by the Douglas B. Floreani chalet. In summer there's mountain biking a mixture of the ski and snowshoe trails.

I had an excellent time.

PS. One of the curious features of Quebec is that the web is fairly sparse -- even in French (English sites are very limited). So this may be the best coverage of this trail on the web!

[1] The phone can't be in airplane mode though, that disables the GPS wireless. Just turn off roaming and turn off cellular data.

Update: I found a list of Grands Parcs that rent XC skis as of Jan 2013: 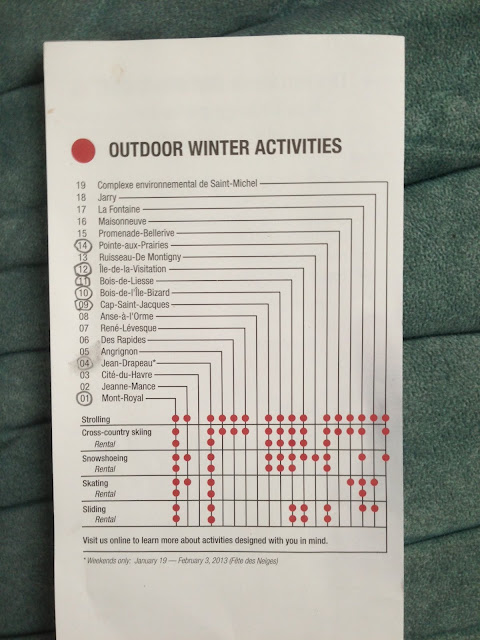 Jean-Drapeau doesn't really count, it's tiny and it rents for a winter festival. So the parks that rent XC skis include:
Angrignon, which I remember as a good ski park, doesn't rent. Maybe my memory is off.
Posted by John Gordon at 1/27/2013