Android tablet price crash: do we have a cereal box computer yet?

Fifteen years ago, I predicted sand-based tablet devices would soon follow the price-collapse trajectory of the pocket calculator. They would become so inexpensive that cheap versions would show up in cereal boxes. I was remembering the price crash that happened shortly after my family spent the equivalent of 500 2013 dollars to buy me a four function desktop calculator. (We were poor. That hurt.) 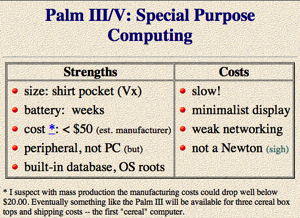 Like a stuck clock I continued to repeat my prediction over the many years to come, albeit with less conviction. Finally, in 2010, Gassée told us Google was aiming for the $80 smartphone [1]. Which may have happened this year, albeit without much attention.

We have since moved closer to the cereal computer; eqe reports buying an Android tablet for $35 in Hong Kong in Nov 2012. That price presumably omits patent payments [5]; it is possible because AndroidOS is available without charge and Chinese factories have excess capacity to produce commodity components.

So, at last, the price collapse seems to be happening. So the question is why now?

One answer is that Moore's Law is failing; computers that were once good for only 2-3 years now work perfectly well for six years or more (barring component failure).

On deeper reflection, however, I think that's the wrong answer -- because the question is misleading. The price of computing has not really collapsed; only computers have become inexpensive.

So we may soon have our cereal box computers, but they won't be worth much. That's because an AndroidOS based 2013 tablet is both a network peripheral and an ad-consumption peripheral that requires network access to be truly useful. Network access is still relatively costly, on the order of €250/year in cutting-edge Estonia [3].

Alas, just as it seemed I might hit my old target it split in two. I'll never hit it now, it no longer exists.

Eventually, of course, the direct cost of a certain form of computing will fall. Eventually GoogleOS devices will be able to access GoogleFunded networks for a very low cost [4]. Whether there will be other forms of computing at different prices remains to be seen.

The cereal computer remains one of my worst predictions.

[1] I assume anyone reading this is smart enough to know that contract-bound prices aren't worth discussing.
[2] Perhaps by low cost 4G wireless piggybacked on the fiber network they're building out in the US.
[3] Much more in lagging-edge America.
[4] We will be pay in other coins.
[5] I believe part of the reason calculator prices crashed is that there was minimal IP protection in those days; software patents had not been invented. I recall reading that large parts of calculator functionality were not patented.

Update 5/26/13: @danielgenser pointed me to a 2012 article on a limited circulation issue of Entertainment Weekly that included the guts of an ultra-cheap Chinese Android smartphone.

We could dump a lot of computer power into cereal boxes if we were willing to put in used equipment. I keep thinking there has to be a use for old Palms, PPCs, WinMo smartphones, etc. besides landfill and exporting to the third world as techtrash. There's a lot of virtually free computing power out there if one could figure out a good use. The big problem, of course, is that it's the software and support that cost, not the hardware. Even in the 3rd world, is it worth working with a dead OS and old device vs. a new, crappy Android ICS or JB one?

I think the old third world is a vanishing land. The $80 smartphones are the big computing power in Africa ...