When we lived in Michigan's Upper Peninsula snow scoops were sold at the local hardware store. Snow scoops is how snow was moved before snow blowers; they're still great for moving snow where blowers don't work. Or aren't wanted.

Our scoop lasted 20 years, but it finally split along a seam. This distressed #3; snow scoops are essential for creating a solid back yard mound for dog and child play. Alas, we couldn't find any in the Twin Cities. Not enough snow I guess.

Once we'd have been stuck, but Google found a supplier - Silver Bear Manufacturing of scenic Atlantic Mine Michigan -- just a bit southwest of Houghton MIchigan -- where they had 105" of snow in 2004. Oops, that was in one month of 2004. Last winter they had 225" of snow. Yeah, about 20 feet. 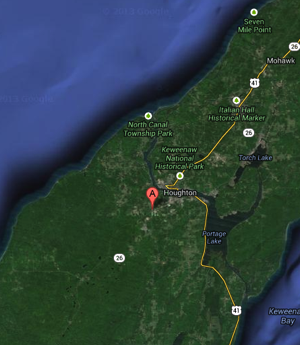 (That's Lake Superior on either side of this peninsula).

Silver Bear has a charmingly ancient web site. I paid my $78 and the 22" snow scoop showed up a few days later. It's so solid it makes our 20yo scoop look like a child's toy. Of course the bolt holes didn't quite line up -- that's how I knew it was authentic. Nothing a bit of screwdrive hole stretching and hammer banging couldn't fix. This thing is definitely from the UP.

Here it is ready for action. Let it snow. 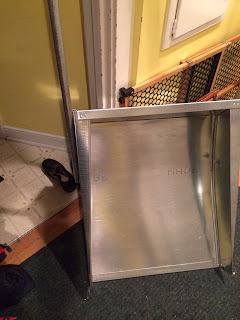