Facebook, the everyman feed reader, has an “attention economy” problem that’s familiar to anyone who has used industrial feed readers like Feedbin or Reeder.app (emphases mine):

…So many posts, videos and images are being published on Facebook that the average user has about 1,500 new items they could see when they log on. Some people have as many as 15,000, the company says.

Over the last two years, the social network has repeatedly tweaked the system to show the top 300 or so items that it predicts each person will want to read. Facebook argues that people prefer to see videos, photos, news articles and updates from their friends and family more than from brands. So over time, posts by businesses have shown up less frequently….

My son is up to several hundred sources, and they each generate a few posts a day. I’m sure he’s far behind the stream — if his timeline showed “most recent” he’d never see anything from Friends or Family.

Of course users could turn off the pages they don’t want, but, really, they kind of like them. The problem is compounded by Facebook’s UI; unlike an industrial Feed Reader (Feedbin, Feedly, etc) it’s not designed for managing large volume post streams.

So users are drowning in posts, most of which they kind of like, but they’re not seeing the things they really like — like the grand-dogs new teeth or the niece’s haircut.

At the same time Facebook is watching ad revenue go missing. Users dislike Facebook’s ads, but they like news posts from their favorite bookstore — and the bookstore’s paying nothing (or used to, anyway).

That problem is getting fixed …

… the company told marketers that if they wanted to reach customers on Facebook, they needed to buy an ad.

Seems reasonable. I know how to tweak my Facebook stream to see what I like — but I’m a geek. Civilians aren’t going to do that. So the “fix” doesn’t seem too bad — unless you know something Mr. Goel doesn’t know. Unless you know that not all Facebook Pages are businesses or “brands”.

For example, these are 6 Pages I administer: 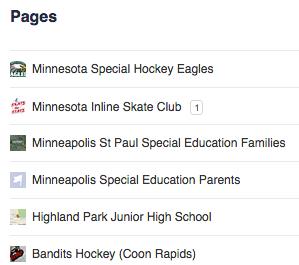 All of these are at risk - and the trend is already underway. Here are some recent stats from our special hockey team page - a page with 81 “Likes” (Subscribers):

The most recent post was seen by 15 of those 81. That number is going to fall even further — unless I pay for the posts to be seen (I won’t).

Facebook has a real problem — but their Feed Overflow Fix is going to cause a lot of collateral damage.

One approach for organizations and nonprofits would be to convert Pages to Groups - except we don’t know how Facebook is going to treat posts from Groups. Maybe they’ll want Groups to Pay to Play too.

For my part I’ll delete most of these Pages, and I’ll move back to email and to blogs. The transition is easier because so many of the people I want to reach have left Facebook (perhaps because of the Feed Overflow problem).

It’s not all bad news. Facebook’s policy might move non-profits and local government back to open-standards blogs - eventually.