Donald Trump is a sign of a healthy democracy. Really.

I’m a liberal of Humean descent, and I’m a fan of Donald Trump.

No, not because Trump is humiliating the GOP, though he is. Of course I enjoy seeing the GOP suffer for its (many) sins, and it would be very good for the world if the GOP loses the 2016 presidential election, but Trump won’t cause any lasting political damage. Unless he runs as a third party candidate he’ll have no real impact on the elections.

I’m a fan because Trump appears to be channeling the most important cohort in the modern world — people who are not going to complete the advanced academic track we call college. Canada has the world’s highest “college” graduation rate at 55.8%, but that number is heavily biased by programs that can resemble the senior year of American High School (in Quebec, CEGEP, like mine). If we adjust for that bias, and recognizing that nobody does better than Canada, it’s plausible, even likely, that no more than half of the population of the industrialized world is going to complete the minimum requirements for the “knowledge work” and “creative work” that dominates the modern economy.

Perhaps not coincidentally about 40-50% population of Canadians have an IQ under 100. Most of this group will struggle to complete an academic program even given the strongest work ethic, personal discipline, and external support. This number is not going to change short of widespread genetic engineering... 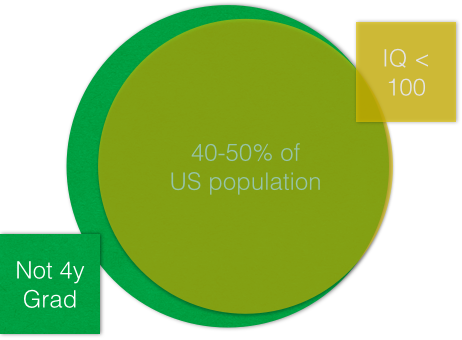 This cohort, about 40% of the human race, has experienced at least 40 years of declining income and shrinking employment opportunities. We no longer employ millions of clerks to file papers, or harvest crops, or dig ditches, or fill gas tanks or even assemble cars. That work has gone, some to other countries but most to automation. Those jobs aren’t coming back.

The future for about half of all Americans, and all humans, looks grim. When Trump talks to his white audience about immigrants taking jobs and betrayal by the elite he is starting a conversation we need to have.

It doesn’t matter that Trump is a buffoon, or that restricting immigration won’t make any difference. It matters that the conversation is starting. After all, how far do you think anyone would get telling 40% of America that there is no place for them in current order because they’re not “smart” enough?

Yeah, not very far at all.

This is how democracy deals with hard conversations. It begins with yelling and ranting and blowhards. Eventually the conversation mutates. Painful thoughts become less painful. Facts are slowly accepted. Solutions begin to emerge.

Donald Trump is good for democracy, good for America, and good for the world.