Why DOJ should block Aetna and Anthem acquisitions: A story of strategic pre-authorization delays

The health insurance industry is consolidating. Aetna acquired Humana and Anthem bought Cigna. That leaves UnitedHealth, Aetna and Anthem as the mega-corporate rulers of US healthcare. Unless, of course, the US Justice Department blocks these mergers.

Like most people who pay attention to healthcare policy I very much hope the DOJ does its job properly. I’m glad we have the Obama DOJ to stand up for us, at least now we have a fighting chance. That’s not why I’m writing this blog post though, and it’s not the reason why I’ll be writing Senator Klobuchar to ask her to work against these mergers.

I’m writing this because, of course, I’m personally mad at Aetna. I think I know why Aetna and Anthem are in a position to do the acquiring, and it’s not because they’re better at delivering health care. I think they’re winning because they excel at both strategic incompetence supported by a tobacco-industry class executive culture.

In my case a physician ordered a radiology procedure for me that requires pre-authorization by my insurance company - Aetna. The order, alas, was placed in early December — perilously close to the end-of-year period. A period where cost can shift, depending on deductibles, from the insurance company to the insured, or from one carrier to another.

Aetna could decline the authorization. That might have been a reasonable act — not every physician recommended procedure is a good idea, particularly when the physician owns the imaging process. I’m guessing they don’t have grounds for denial, so instead they simply stall. Information is provided … and Aetna can’t find it. They ask for the same information several times. They will succeed in running out the clock. My physician’s staff tell me Aetna excels at this game, even by industry standards they’re good at not delivering what we pay for. Which is usually considered theft.

Aetna’s executives don’t have to write up a formalize this profitable process. They don’t need to put anything in writing. All they have to do is underfund their pre-authorization process (a “cost center”), or provide financial incentives to delay payments, or not staff for the holidays, or promote executives who are good at cost control. Most likely they do all four.

I suspect Anthem has the same skill set, but Humana and Cigna probably aren’t quite as good at being evil. There are so many ways in healthcare to do well by doing wrong; it’s a rough rule of thumb that the more profitable a healthcare operation is the less good it’s doing.

Aetna is going to win their little battle with me. The best I can do to get even is write Senator Klobluchar (I know Senator Franken will oppose) and complete their legally mandated complaint form.

After completing the official complaint form, and separately posting a public message to Twitter @aetnahelp and follow-up email to socialmediacustomerservice@aetna.com, I received this message on the morning of 12/30: 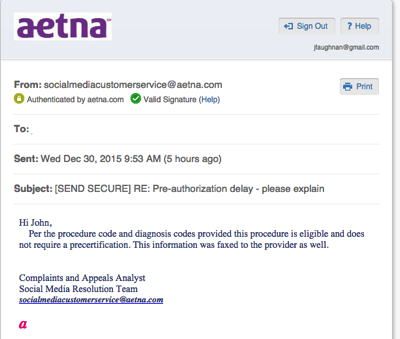 Of course it’s too late now, Aetna ran out the clock. As we knew they would. Even though the bad guys won this one, I would try public Twitter messages and email to socialmediacustomerservice@aetna.com in future. A kind of special service track for the geek elite.

Superb article on so many levels....Right-wing ideologues instinctively attack government inefficiency and corruption. Your comments show big corporations are no better with respect to transparency, customer service and probably a considerable number of other variables.