Crisis-T: blame it on the iPhone (too)

It’s a human thing. Something insane happens and we try to figure out “why now?”. We did a lot of that in the fall of 2001. Today I looked back at some of what I wrote then. It’s somewhat unhinged — most of us were a bit nuts then. Most of what I wrote is best forgotten, but I still have a soft spot for this Nov 2001 diagram … 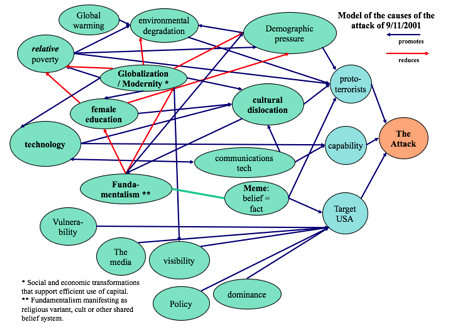 I think some of it works for Nov 2016 too, particularly the belief/fact breakdown, the relative poverty, the cultural dislocation, the response to modernity and changing roles of women, and the role of communication technology. Demographic pressure and environmental degradation aren’t factors in Crisis-T though.

More than those common factors I’ve blamed Crisis-T on automation and globalization reducing the demand for non-elite labor (aka “mass disability”). That doesn’t account for the Russian infowar and fake news factors though (“Meme belief=facts” and “communications tech” in my old diagram). Why were they so apparently influential?

Maybe we should blame the iPhone …

… Edgar Welch, armed with multiple weapons, entered a DC pizzeria and fired, seeking to “investigate” the pizza gate conspiracy—the debunked theory that John Podesta and Hillary Clinton are the architects of a child sex-trafficking ring covertly headquartered in the nonexistent basement of the restaurant Comet Ping Pong. Egged on by conspiracy videos hosted on YouTube, and disinformation posted broadly across internet communities and social networks, Welch made the 350-mile drive filled with righteous purpose. A brief interview with the New York Times revealed that the shooter had only recently had internet installed in his home….

…. the earliest public incarnation of the internet—USENET—was populated mostly by academia. It also had little to no moderation. Each September, new college students would get easy access to the network, leading to an uptick in low-value posts which would taper off as the newbies got a sense for the culture of USENET’s various newsgroups. 1993 is immortalized as the Eternal September when AOL began to offer USENET to a flood of brand-new internet users, and overwhelmed by those who could finally afford access, that original USENET culture never bounced back.

Similarly, when Facebook was first founded in 2004, it was only available to Harvard students … The trend has remained fairly consistent: the wealthy, urban, and highly-educated are the first to benefit from and use new technologies while the poor, rural, and less educated lag behind. That margin has shrunk drastically since 2004, as cheaper computers and broadband access became attainable for most Americans.

…  the vast majority of internet users today do not come from the elite set. According to Pew Research, 63 percent of adults in the US used the internet in 2004. By 2015 that number had skyrocketed to 84 percent. Among the study’s conclusions were that, “the most pronounced growth has come among those in lower-income households and those with lower levels of educational attainment” …

… What we’re experiencing now is a huge influx of relatively new internet users—USENET’s Eternal September on an enormous scale—wrapped in political unrest.

“White Low-Income Non-College” (WLINC) and “non-elite” are politically correct [1] ways of speaking about the 40% of white Americans who have IQ scores below 100. It’s a population that was protected from net exposure until Apple introduced the first mass market computing device in June of 2007 — and Google and Facebook made mass market computing inexpensive and irresistible.

And so it has come to pass that in 2016 a population vulnerable to manipulation and yearning for the comfort of the mass movement has been dispossessed by technological change and empowered by the Facebook ad-funded manipulation engine.

So we can blame the iPhone too.

[1] I think, for once, the term actually applies.

"mass market computing" seems a bit generous. WLINCs don't compute. They gravitate, unchecked by any training in critical thinking, toward the streams that pander to the fears and ignorance which are their pre-existing condition. But, regardless of my quibble, I see this analysis of our seriously sick body politic as an accurate description of the sheep who will line up for the wolves. In a kind of deadly embrace, a complimentary phenomena is that "Media" ceased to operate as a trusted commons of information and has effectively morphed into propaganda channels for those with the money. Our conversations and sharings on social media mean as much to politics as any network news or news paper and I find I have to force myself to browse outside my chosen streams because it is too easy to only see the world I want to see...and think I am seeing the world.