I hope to write about my response to “crisis-T". Yes, that T. The anti-O.

This is a prelude to that post. It’s a note about Orchid Island, Taiwan. I visited it in early 1982, shortly before the nuclear waste dump opened. You can see the facility on Google Maps, it’s not a secret: 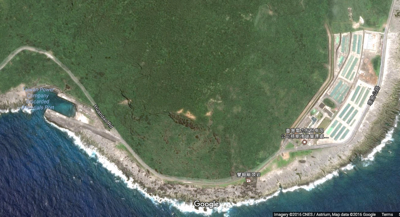 In Google Maps the port that receives the waste is labeled as the “Taiwan Power Company Discarded Materials Port”.

Orchid Island, also called “Lanyu island” and once known as “Death Island” [1], didn’t ask to be Taiwan’s nuclear waste dump. It was a gift from the big island. Despite the waste material Orchid Island is something of a tourist attraction these days. I remember it as severely beautiful and I hope it’s doing well.

I write about the island now as a reminder that Taiwan has an extensive and sophisticated nuclear power program. At times Taiwan has had an active nuclear weapons program. If Taiwan wanted a nuclear deterrent against invasion by China they could certainly produce one. Of course, to quote Wikipedia: “The People’s Republic of China has announced that any Republic of China possession of nuclear weapons is grounds for an immediate attack.” (no citation, I can’t tell which PRC official entered that.)

Trump has, of course, thrown a spanner into America’s China/Taiwan machinery…

I’ll get back to this.

All a native woman has to do to be divorced on “Orchid Island" is to hand back to her husband the string of agate beads he gave her for their engagement.

Mrs. Carveth Wells, the first non-aborigine woman ever to visit the tiny dot of land 50 miles southeast of Formosa, brought back this report of, her four-day visit:

Women outnumber men and definitely are the bosses among the 1,457 Yamis tribesmen who probably originated in Malaya.

WEAR LEAF APRONS The women wear leaf aprons and nothing else. They put on improvised bras only when strangers appear. The men just wear G-strings. If no children are born to a couple, the wife takes it for granted the man is to blame and divorces him. If she has more than three children, she's just as apt to leave him. Too big a family, too much trouble.

The women like a certain fish that is hard to catch. If her husband doesn’t provide her with enough of such fish the woman just hands him his beads and starts husband-hunting. The men not only fish but have to do most of the housework. The women cultivate taro, a starchy root which is an important item of food.

The Chinese name for the island is Lan Yu, or Orchid Island. It also has a grim nickname “Death Island.” The prevalence of disease gave the island its nickname. One particular mite penetrates the skin without being felt and often kills its victim within 24 hours.

However, the World Health Organization sprayed the island in June with DDT, eliminating most of the lice, and mosquitoes.

POLICEMEN STAY IDLE There are three policemen on the island but the chief, Capt. Jacob Yang, says there is no crime so they have nothing to do. Mrs. Wells, wife of the explorer, made the trip for the American Museum of Natural History in New York. Villagers walked for miles to gaze in wonder on her white skin and blonde hair…

When I visited in 1982 the Yamis and I were still exotic to one another.