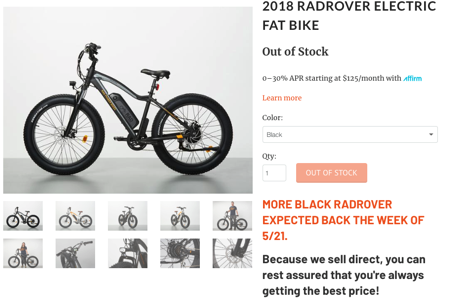 I remember when, just before the great .com crash, a mysterious ‘product x’ was going to revolutionize the world:

John Doerr speculated that it would be more important than the Internet.[6] South Park devoted an episode to making fun of the hype before the product was released. Steve Jobs was quoted as saying that it was "as big a deal as the PC",[6]

That product turned out to be the Segway. Which was, and is, a pretty neat product — but perhaps a few decades ahead of its time.

Meanwhile, as a quiet consequence of LiOn battery evolution and China, eBikes are growing exponentially. A fusion between traditional bicycle and scooter.

Like most cyclists I have mixed feelings about eBikes. On balance I think they are a good thing, but they will certainly have bad consequences — especially when collisions happen. A 250 lb adult on a 50 lb eBike moving at 25 mph is a lot of kinetic energy.

Mostly though, this is a marker of a changing world.