But Google has weaknesses. Google maps are increasingly hard to read, particularly in sunlight. Google has no options for scenic routes; even when I choose an alternate route for the pleasure of the trip Google aggressively reroutes me to the fastest option. Apple maps at least have a "no highway" trip option.

These are small weaknesses though. Apple still gets big things wrong even with their latest revisions. Apple hasn't learned much from Google's Local Guides program. My Local Guide score lets me relocate a business in seconds -- something that's made me quite popular with CrossFit gyms and medical clinics that have moved (sometimes they've suffered wrong location listings for months).

Most of all Google has bicycle routes and Apple doesn't. That gap means I can't consider Apple Maps for everyday use. Bike routes are a map moat and Apple hasn't tried to cross it.

But ... Google's bike map moat is silting over. They aren't updating them any more. Google once accepted bike route suggestions from Local Guides -- but now they direct us to treat omissions as road errors and even those are ignored. For example, here's Google's current map of bicycle trails around Hastings Minnesota: 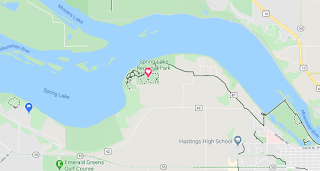 That map makes it seem there's no route from the urban core to Hastings. In fact there's a lovely trail from Hastings to the blue dot on the left, then a brief gravel road, then a trail to St Paul and thus Minneapolis.

Google's neglect is Apple's opportunity. This is an area where Apple could actually beat Google Maps. I think they'd like that.

And, of course, if Apple did make a move maybe Google would accept some improvements ...
Posted by JGF at 2/17/2020