[Update 3/6/2022: After I exposed this scam I revisited our purchase history and the listing for the scam subscription had changed. Instead of "Luni" the company and "Scanner" the App it showed:

In addition, when I clicked on the Report a Problem link I see there's an entirely new feature!

Unfortunately, perhaps due to issues with my Store Apple ID, I can't select that Apple ID as a family member. Other family members appear.

There are several good arguments for a non-Apple iOS App Store. The best reason I know if for competing App Stores is that Apple's App Store has many frauds.

Consider the case of the Luni Scanner App; #85 in "Business" in the US App Store.

Luni's is a "mobile app publisher" their site claims they are "the largest french app publisher" (yes, lower case "french"). Their domain information is protected. All their apps are subscription based.

Luni makes a suspiciously wide range of apps with generic names including a "VPN" app, a "Translator" and a "Video Editor": 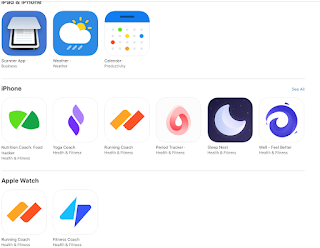 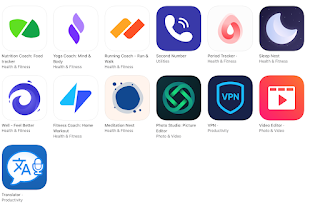 The VPN app has 22.9K ratings with an average of 4.7/5 by people like "yessirbruh". The 'most critical' ratings (only accessible on iOS) make clear it is a scam with clever subscription pattern that tricks users into paying a high weekly rate.

The Scanner App is the similar scam that bit my family. It has 174K ratings and 5 stars. The vast majority are obviously purchased. The "critical" reviews mention unwitting subscriptions. A screenshot that appears on first launch shows how it works for the "Free" app with add-in purchases: 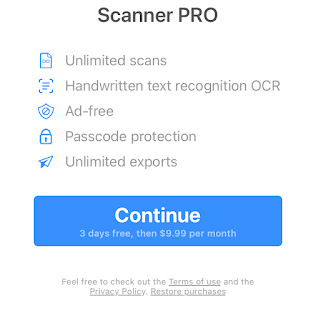 This covers the entire screen. It appears that one cannot use the App without clicking Continue. In fact if a user closed this screen the App can be used. Of course most naive users, inducing our family member, will click Continue so they can start their "free trial". Except that's NOT what Continue does. Within 3 days charges will start. In our case, not $10 a month, but $5 a week.
The family member has some reading and processing issues, and a trusting nature, that made him particularly vulnerable to a scam. He thought "5 stars" actually meant something. It didn't occur to him that Apple would allow fake reviews; he trusted Apple. He was also unaware that iOS Notes has a decent scanner app, that Microsoft provides an excellent free app, and that we actually own a quality app from Readdle.
Because of the way Apple's Family Sharing works for purchases the monthly charges went to my Apple ID. Because of changes Apple made to Apple IDs that account couldn't receive email; I stopped getting Apple purchase statements over 12 months ago.
It took some time for me to see what had happened. I only discovered the scam when doing a routine review of our iTunes subscriptions. With some help from Google I was able find where Apple shows purchase records -- about 20 weeks at $5/week. With more Google help I placed a repayment claim against 20 charges (Apple does not support repayment claims against a subscription.) At this time I do not know if Apple will process the claims.

Scanner App is far from the only scam app on the App Store, and Luni far from the only "publisher" to earn millions from dark subscription patterns. Apple has let this problem fester for years; they are unwilling to fix it.

That's why we need alternative curated high quality App Stores. So we can restrict purchases to a trustworthy vendor.

For me $100 is not a big cost and the experience is a great learning opportunity for my family member. Even so, a reaction is needed. I'm sharing this experience here, but more importantly I'll share a condensed version with our two MN Senators and our Representative and the MN attorney general. If Apple doesn't get the money out of Luni I'll try the AMEX fraud process.

To be clear, the problem is Apple. Luni is just taking advantage of the opportunity they've been given. We need quality App Stores. That requires competition.

Below it the letter I'm sending to our Senators and Representative:

I'm writing to share a family story that illustrates why we need alternatives to Apple's iOS App Store. I hope you will support efforts to force Apple to allow competing App Stores with viable business models.

The problem is Apple has done a poor job keeping scams out the App Store. Recently a vulnerable adult family members was tricked by very sneaky sign up procedure. He unwittingly subscribed to a worthless app for $5/month. Because Apple has no controls on purchases in family sharing accounts I got the bill. It ran for at least 20 weeks before I spotted it and unsubscribed. I submitted a reimbursement request to Apple for 20 transactions.

When I investigated I found the app vendor, Luni, had dozens of similar worthless apps with the same trick subscription process. They have hundreds of thousands of fake reviews. The scam Scanner App was #81 in its category with a 5 star rating. The "publishers" make millions. I'd wager they are a front for anyone who has a good scam app; they create an icon, embed their subscription scam, and take a cut.

The App Store has many apps like this. They make Apple hundreds of millions of dollars a year. Perhaps billions. Apple could have cleaned them out years ago. They could do so many things to make these traps less effective. They've done none of them.

We need a better App Store. Apple doesn't deserve a monopoly on iOS App sales because it's been at best negligent, at worst malevolent. We need higher quality trustworthy curated App Stores in place of Apple's service.