Hibbing and the Hull Rust 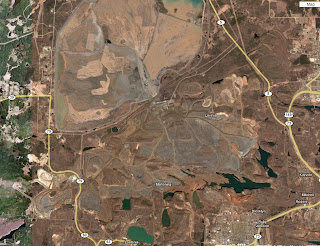 Hibbing is a northern MN town with a remarkable history (the 10/07 Wikipedia article doesn't do it justice).

If you're ever wandering Minnesota's Iron Range, I recommend a visit to the outskirts.

Yes, as seen on screen capture of a Google sat map the town of Hibbing (bottom right of the image) is dwarfed by what was once the world's largest open pit mine - the Hull Rust:

".... more than three miles long, two miles wide and 535 feet deep. This man-made "Grand Canyon of the North" was the first strip mine on the Mesabi Iron Range. The amazing view continues to grow as the Hibbing Taconite Company Mine expands its mining operations.

Since 1895 more than 1.4 billion tons of earth have been removed on its 2,000 acres of land, and more than 800 million gross tons of iron ore have been shipped from the mine. At peak production in the 1940's, as much as one quarter of the ore mined in the United States came from the Hull Rust Mine."

Hibbing was a boom town before WW I, with 60 saloons, about 16,000 people, an Opera House and a gorgeous Carnegie Library. That's about the time folks realized the town was sitting on vast amounts of iron. The town was demolished, it's not clear it every truly recovered. The Greyhound bus company started then, busing miners from their new, more distant homes.

There's a small park, little known to tourists, documenting a bit of the old town. The park itself is falling into history, it looks like a political gift that has since been neglected. There's a lot of that in the range.

I took a hand-held panorama picture from the Hull Rust lookout and stitched it together. It was a hack job with lots of artifacts and a curious triplication in one join, but it does capture something of the view from the lookout (click to see larger image, you can download the full res as well):
Update 10/27: Here are some more photos from our Range trip, see also: The Wellstone memorial and the path not taken.