What if we could see the diversity of minds?

Humans, to the eye, are not so diverse.

The vast majority have, or once had, four limbs, two eyes, one head. Most rely heavily on vision. Some are faster, some slimmer, some taller -- but not so much. They all have similar genetic aging rates, from old at 50 to old at 80.

But what if you could see minds instead of forms? 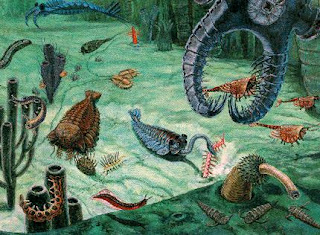 Ok, so pre-Cambrian diversity was pretty extreme. But human brains are actively evolving now. To quote Hawks (via Marginal Revolution):

We are more different genetically from people living 5,000 years ago than they were different from Neanderthals...

Active brain evolution means lots of variation. Most of the variations are mostly marginally harmful, some quite disabling, some both advantageous and problematic. They all mean that brains are less alike than the bodies we see.

Brain, mind and meme give three platforms for variation and selection to play on. It's a recipe for combinatorial variation.

So it's plausible, that if we were able to see minds the way we see bodies, we'd find a very entertaining sidewalk. Some pedestrians would be twenty feet all and thin as posts, others ten feet wide with an extra limb and a tail. Some covered in fur, others green and yellow with antennae.

Perhaps, as some of my favorite writers have speculated, one day we'll remake our bodies to fit our minds, and the streets will make today's San Francisco seem quietly uniform.

That's a long way away, and perhaps unlikely. In the meantime, however, we can start imaging minds instead of seeing bodies. With a dash of enlightenment 2.0, we may see the aliens among us, and sense a deeper truth beneath what vision alone can show.

Very cool post. I often think about the way I'm perceived and I'm sure most people peg me wrong. I'm sure I do the same thing all the time as well.