How to choose a city to live in

Imagine you are an active geek, and that you can live in any city on earth.

Where do you go? For that matter, where might you want to visit?

There are all kinds of metrics you might consider, but there’s a single metric that produces this particular list:

What does Minneapolis have in common with Paris?! What joins Copenhagan and, yes, Bogota?!

This list. These are the world’s top 10 cities for bicycling.

I’ve lived most of my life in Montreal and Minneapolis, and I’ve bicycled Munich. It know it’s hard to credit, but there is something similar about those 3. Paris is an outlier, but then there’s no accounting for Paris.

Ok, so Bogota, which people my age associate with drug wars and extreme violence, is another outlier. Until I summarized this list I’d never have considered visiting Bogota. Now I guess I have to.

If you’re a US citizen you might now be considering Portland, Seattle and (yes!) Minneapolis. I know, it’s a bit mind blowing. Now consider this list …

These are the top 3 states for health care quality in a the recent NHQR State Snapshot report (I must confess, by the way, that Wisconsin is a better bicycling state than Minnesota, it’s just that it doesn’t have much in the way of an urban life.)

I live in Minnesota’s Twin Cities (St. Paul, the sleepier sib of Minneapolis), which in addition to being the #3 bike city in the USA is also home to the world’s largest and most attractive legal dog park.

Sometimes, you just get lucky.

Update: chrismealy tells us that his Seattle hometown doesn't belong on the list, and that Portland has cyclists but not infrastructure. He writes recommends a terrific bicycle blog (http://hembrow.blogspot.com/, I just subscribed) so I'll take his word for it.

I know Munich is extreme, and Montreal is only very good, so there's clearly a big drop after #3 on the list. That moves Minneapolis even further up.

Incidentally, this update gives me an excuse to post a picture of the bicycle I bought in 1976. My Raleigh International (see Sheldon Brown's page for an original ad photo) is going for the full refurb treatment at the local racing shop in honor of a coming birthday. This is the pre-refurb shop ... 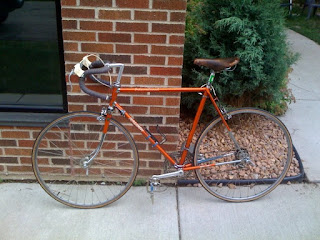 That list is crazy! Portland has the best bicyclists and the best bike activists, but the city itself is just getting started on bike infrastructure. They have really ambition projects underway so in a few years they'll have earned their reputation.

Seattle (where I live) is all talk and no pedal. We don't have a single block of cycle track. The city just paints bike icons on the road and calls them "sharrows." They're useless because they're always in the door zone or under the right side wheels of moving traffic. It's just greenwashing. The city is still too concerned with inconveniencing drivers. And our massive hills should count against us too.

I think Boulder is doing a pretty good job though.

If you want to see real bike infrastructure, check this out:

Wow. Maybe Minneapolis really ought to be number one in the us. I do know Montreal and Minneapolis have terrific trails.

Not bad for a state with a winter! Seattle and San Francisco had higher rates, but that's a gimme.