I know you feel things haven't progressed very far, but you really need to take a look at how we did communications in 2010.

Believe it or not, in 2010 Google's Gmail could open 3 windows that looked like this ... 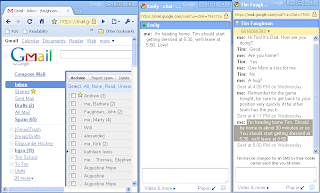 They all looked rather the same and did rather similar things, but they all worked somewhat differently with different phones and different computers. The SMS was the most restrictive, it was limited to less than 200 ascii characters! Despite being so limited, it cost much more than the others. It worked, however, with the archaic phones that persisted in the US until 2012.

Pretty bad eh? It gets worse. I'd tell you about Twitter, but you wouldn't understand it at all.

Aren't you glad you're not living in the dark ages any more?