Why the Pope is crazed -- the infographic

I Google-Reader-Shared a blog post on this British Religion in Numbers graph ... 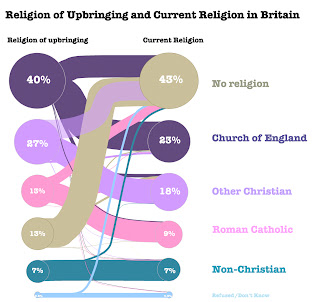 I moved on to the next post, but the more I thought about it the more I understood how dire things look for the Pope, and why he was so crazed during a recent UK visit.

The chart shows the generational flow between birth and adult religion in Britain. There's a huge influx into the "No Religion" category, and very little flow out of that category. If the trend continues (big if) then within 20 years the British Catholic church will be completely irrelevant. The other Christian churches will be very close behind.

I suspect the Canadian picture would be similar, but things are more complex in the US. Even though the "no particular faith" group has almost doubled in a generation, it's clear that US Christian belief has miles to go.

Not so in Britain, and presumably not so in most of Western Europe. Papal revenues in particular must be screaming downwards. Growth in Africa can't possibly compensate.

The Catholic church has lasted a very long time. Has it ever looked so feeble?
Posted by JGF at 9/24/2010