I wasn't at the very first Minneapolis Friday Night skate, but I remember Allan and Mike ...

... Mike Merriman and Allan Wright started the Minneapolis Friday Night Skate in 1998. More or less following the strategies above, the Minneapolis FNS was instantly successful with several dozen skaters the first evening. Participation rose dramatically with publication of a full article in a local paper, appearance by Allan on the local news station (the weatherman joined him on skates), and taping of the event by another television station. By the second year, the skate had reached levels of 150 skaters each time....

From the above page on starting a night skate you'll get to Zephyr Adventures, Allan still owns it and runs tours.

I think I joined in 1998 or 1999. I do remember the excitement; 100 skaters is a lot in Minneapolis. The skate varied over the years, but it usually looked something like this: 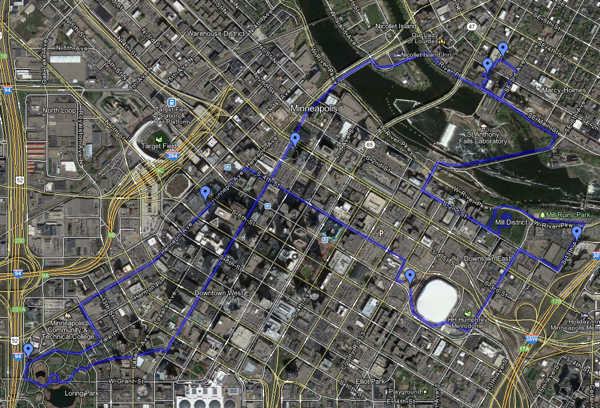 In the early years there was a hint of anarchy to the skate. Even then we were Minnesotans and not kids besides -- so it was only mildly improper.

Allan was dashing and charismatic, so it's not surprising that attendance declined after he moved on. Perhaps more importantly, inline skating popularity peaked in the mid 90s. By the early 2000s we were fortunate to get 30 skaters, but that was still an excellent number.

Even in 2009, when family obligations kept me away from most of the skates, I loved it. The Stone Arch bridge, the spiral trail to Gold Medal Park, the seamy side of Hennepin, flying through Loring in the moonlight, waving to the crowds on Nicollet, watching the best skaters do leaps down the stairs, swooping down the hill and past the Nicollet Inn...

Things go away. By 2010 I'd stopped going, the numbers were too low. Bill F stuck it out through 2011, but sometimes he was the only skater. This year his FNS web site went offline.

One day, perhaps, inline skating will make a comeback, and maybe someone else will do a Friday Night Skate. Or perhaps it will pass into the history of Minneapolis, remembered by very few people.