Why does Thrifty Rental provide car key sets bigger than my iPhone?

When I rented from Thrifty recently I got this set of keys: 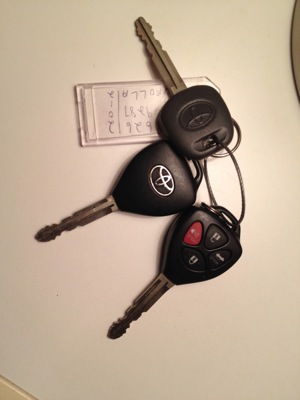 There were two keys with batteries, each 1cm thick at the head. A third valet key, designed to provide ignition access without trunk access, is securely bound to the other two with a fixed cable.

Yes, the "valet key" cannot be distributed without the full access key.

Taken together, they dwarf my iPhone. With a wallet in one front pocket and an iPhone in the other, there's no way to comfortably carry them in conventional pants -- even if these are the only keys you carry.

Why does Thrifty do this?

A manager told me that the extra remote reduces customers complaints about dead remote batteries. More importantly, he said, they lose fewer keys now that they've moved to this massive set. I assume he meant it's much harder to dash for a plane with a key in the pocket -- these suckers are impossible to forget.

Of course they could achieve the same effect by putting a 3 inch wood cylinder together with a single key. If you lost that one though you'd only pay a huge markup on a single key, instead of a huge markup on 3 keys. Maybe Thrifty's rental business is sustained by lost key fees.

Does anyone know a rental business that has a sane key chain?

I hadn't paid much attention to car-sharing alternatives to the traditional rental business. After carrying these things for four days though, I'm keenly interested.

I think it is done on purpose so you won't lose them. Those keys are expensive to remake and copy.