Why Montreal is the #1 bicycle city in North America.

Portland and Minneapolis have been fighting for bicycle glory over the past few years. We usually trade #1 and #2 spots with the hilly city in American rankings.

It's harder to find comparable rankings that include Montreal; I've seen it ranked #1 in NA but I can't find the reference. Looking at this picture though, I suspect it deserves the #1 slot ... 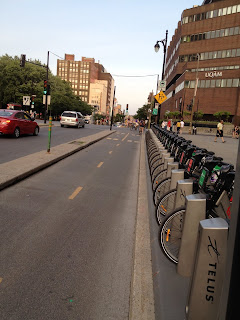 This dull looking landscape is Rue Berri, a major North-South urban artery that parallels the much more fashionable rue St Denis. What you're looking at is not a car lane, it's a two way bicycle avenue carved out of an urban street sometime in the past decade. Alongside is one of Montreal's extensive bixi bike stations (they were first in NA to have 'em, I think Minneapolis was 2nd.)

These separate bike avenues have their own lights and signals; Minneapolis has approximately 1 bike light in the entire city (more are coming). It's comparable to what I saw in Munich 20 years ago.

I'd love to know how Montreal managed this transformation. Maybe a group of Minnesota cycling advocates should make a fact-finding trip to Montreal. I recommend grabbing a Bixi bike at the Berri/UQAM stop, riding north to dinner on Prince Arthur, then down St Denis to Brioche Lyonnaise for desert and then a five minute drop to the river and Vieux Montreal for a beverage on the pier.