Stocks are overpriced again. It's probably not too much of a bubble (yet), but we continue to be significantly above "trend".

It is at times like this that barbers stock talking about stock picks, insider traders get arrested, deficit figures improve, and people notice that BlackRock holds 4 trillion dollars in US stocks. Yeah, trillion. Soon we'll see headlines, if Time is still around, declaring "America is back".

Inevitably, people who know nothing compare post-1995 to pre-1995 stock behavior. Around the time that IT started to transform the world, and China and India became more-or-less industrialized nations, share prices became wavy over a five year timeline .... 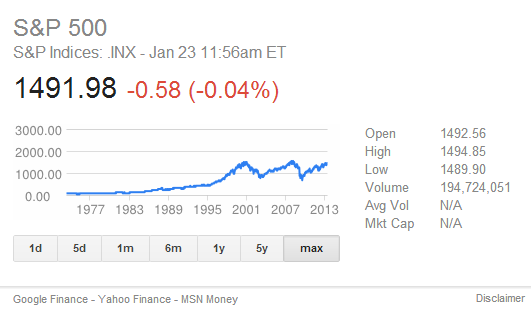 Kind of like a roller coaster, which is what the last fifteen years have felt like. (Note roller coaster is "normal" to most people who read this, only old folks remember something more linear.)

We'd all love to know why this has happened, and if it's really going to go on like this for the next 30 years or so. So, in the last stage of desperation, amateurs like me resort to a hydraulic analogy.

Remember those trillions and trillions? It's as though they were a 10 liter bucket in the hands of BlackRock and the rest of us. The bucket is trying to hit the 1L mark in a 2L cylinder. It pours over the mark or under the mark. It's really hard to hit the mark. There's just too much money, and the market is too small.

We need a bigger market.

Update 5/26/13: I've been playing with this intuition, though I'm far from convinced it means anything. An obvious question is -- bigger compared to what? I think it's 'compared to the productive capacity of global economies. At this time, given the still underutilized potential of the educated populations of China and India, the potential of the post-AI era, and the unused capacity of recession-bound Europe, the global productive capacity is very large. Our public markets have grown over the past two decades, but my hunch is that this growth has been far exceeded by the world's productive capacity. Hence the need for bigger markets.

You say, "There's just too much money, and the market is too small."

Have you ever heard of the Nyquist stability criterion? Recast into feedback amplifier terms, you're saying that "The gain is too high for the phase shift for this feedback loop to be stable."

Try plotting it on a log scale: pre-1995 fluctuations were sometimes as large percentagewise as the post.

Maysonic - Great comment! I will do that and add the log view (and probably a humiliating retraction, but that's why I do this stuff?)

I wonder if, on a longer scale with log correction, there will be a relationship between waviness and subsequent grown in market's capacity to aborb funds -- but of course this easily lapses in to mystical chartism.

Bernd - I hadn't heard of the Nyquist stability criterion but I'll study it.

I tried the log view (Google Finance) and it showed a similar picture to the linear chart.