Once upon a time, in the 1970s, these were microcomputers:

We called them micro-computers because we used the term mini-computers for things that were the size of refrigerators. So something the size of a microwave was, inevitably, "micro".

The term fell out of favor though. In a world where the personal supercomputer is 10" tall, micro seems redundant.

More recently, however, things have gotten smaller. A lot smaller. The KL02 "microcontroller" is shown here next to a Mac's letter L. (Does anyone else make computers other than Apple? No, I didn't think so.) 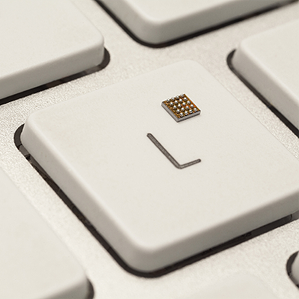 I suppose it will be paired with a sand-grain sized 3D printed battery.

It's time to dust off an old word. Welcome back microcomputer.

Email ThisBlogThis!Share to TwitterShare to FacebookShare to Pinterest
Labels: technology