Apple and the 2013 tech world - in the doldrums

I was in an Apple Store yesterday with a burned-through seven year old power adapter cable. 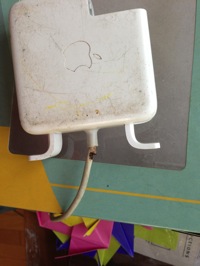 Our much abused power adapter came with a MacBook purchased in November 2006 [1]. That MacBook runs Lion today; very slowly at first but with various tweaks and fixes it's become acceptable for undemanding tasks. [2] The MacBook is in turn newer than the July 2005 G5 iMac [3] my son used this morning for his MacKiev Mavis Beacon typing tutorial. That eight year old machine runs pretty well, we barely notice the slowly progressing 5 year old display discoloration.

Trust me, this is all relevant. I'm going somewhere.

At the app store I was told that Apple's policy is not to service anything more than six years old, regardless of recalls. The tech then gave me a brand new L-shaped power adapter which works well [4]. He may have been influenced by my very long purchase record [5].

I walked out of the store another happy customer, and I didn't look at anything. There was nothing there I was interested in.

Let me repeat that. There was nothing in the Apple Store I was interested in.

That has never happened before. I've also never had a seven year old laptop that's used every day.

It's not that I have everything Apple makes [7]. My new Kobo Glo is a definite compromise; I'd love a less costly iPad Mini, or perhaps an affordable iPad Mini retina, or even a thinner, lighter iPad retina at today's price. Alas, the things Apple makes that we don't already own aren't the things I want from them - or they're too expensive [8]. Gordon's Laws of Acquisition leave me nothing to look at [10].

This tech lethargy problem isn't unique to Apple. There's no tech hardware anyone makes that we really want or need [9]. And it's not just hardware, there's very little software on the market that interests me.

We are in a curiously quiet time for tech lust.

[1] It's interesting to scroll through posts around then, like my Feb 2007 tech.kateva.org posts. My blog posts then were more like my app.net shares today.

[2] Mostly tweaks or fixes to Spotlight and Time Capsule backup, some Lion features disabled, some states not saved. I switched as part of the very (very) painful MobileMe to iCloud transition.

[3] Wow, that was a problematic machine. The heat / fan issues in the G5 iMac line were appalling, not to mention the epidemic of bad capacitors.

[5] Now somewhat inexplicably associated with a single AppleID (discuss), though he couldn't see it there. He had to use my home phone to lookup records.

[6] There are a lot of things I'd like to see, not least vastly better Calendaring and a faster, more useable Aperture, or better replacements for Google's tainted offerings. Problem is, they don't exist. I could probably make good use of an industrial video editing tool, but I don't have time to use one.

[7] I also have two modern Macs that will probably run OS X Mavericks fairly well. Eventually we'll replace the G5 iMac, but it's not like we're in a rush. I'm not even in a rush to get Mavericks, and I rather like the sound of it.

[8] Between the war with Samsung and China's rapid wage growth I don't expect prices to fall.

[9] Things seem even worse for Windows families. The only purchases I hear of are 15yos building gaming machines the way my generation assembled stereos.

[10] Ok, an Apple TV would be useful, but then I'd have to replace my 25 yo SONY CRT with the rabbit ears and the A/D converter. That's a historic artifact.